Duke freshman Zion Williamson left last week’s long-awaited game against North Carolina before one minute came off the clock with what was called a mild right knee sprain, and did not return. Williamson’s Nike shoe basically blew out on him, which caused the injury. As he left the floor to head back to the locker room, the game seemed to become story number three. The primary stories centered around should Williamson step on the floor as a collegian since he appears to be the frontrunner as the NBA’s top draft choice in June, and whether or not the Nike brand would suffer from the “blow out?”

For the record, North Carolina took advantage of the injury and beat the Blue Devils in Durham by double digits. As I write this, it is not clear if Williamson will be ready to take the court in the upcoming rematch.

In fact, as I said, many are wondering if he should play one more minute of college basketball. The play or not play question at the college level is being asked more and more these days. Those on the not play side cite that the athlete is risking millions of dollars if they are injured. Those who favor playing speak of loyalty to teammates and enjoying the college atmosphere.

Thus far, Williamson has not spoken of not returning. Reports out of Durham speak of him being very close to his teammates. I am sure Duke fans hope he has his sights on a NCAA Tournament run and possible title.

Still,  as of right now, he is the No. 1 pick. And he’s also going to get a bunch of endorsement money the moment he enters the draft. That could change if his sprained knee leads to more serious injuries that threaten to cut into his rookie season or the explosiveness that is his game. His inner circle may be pointing this out to him. It is a tough call. I can see both sides of the issue.

Personally, I believe I would play for the competition and loyalty to teammates. As a fan, I hope he and others in similar situations, play.

I have to believe there were millions of people, like myself, who wondered what brand of shoe Zion Williamson was wearing when the shoe blew out, causing Williamson’s injury. The television broadcast knew the answer but obviously made a decision not to inform us during the game. It did not take much research to learn that Williamson wears Nike. And it did not take long for Nike to go on damage control. As their stock dropped close to two percent the following day, they announced that they would begin a “full scaled investigation.”

Naturally, they followed that statement up soon with this was “an isolated incident.” It has been a week now and the Nike stock has rebounded nicely. It seems as if the brand has survived just fine. Would it surprise you if Nike ends up signing Zion and soon after create a special Zion shoe to handle his freakish ability and market it to people as injury proof?

The Los Angeles Lakers, with a healthy LeBron James, lost to New Orleans the other day by a 128-115 count. A New Orleans

team that played without Anthony Davis, the Pelicans’ best player. The same Anthony Davis that James and Lakers president Magic Johnson tried to trade virtually every player on their roster for.

Magic and Lebron are likely beginning to realize the following. They do not have a very good roster, and Davis is not all that. New Orleans is playing well without Davis who has basically shut himself down this season after demanding a trade. And the Lakers have a bunch of guys who obviously do not play much defense. Why would the Pelicans want any of the current Lakers? They just beat them, and LeBron, quite handily. The loss dropped the Lakers below .500 (29-30) and 3.5 games back of the final playoff spot in the Western Conference. 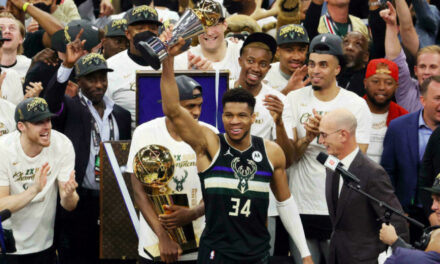 Giannis And The Bucks Finish The Deal