Hickory – The Western Piedmont Symphony continued its Masterworks Series with a concert of all-American music at the P.E. Monroe Auditorium on the campus of Lenoir-Rhyne University on Saturday, February 1, 2020. Joining the orchestra as first-chair string players was the Kaia String Quartet, Victoria Moreira and Naomi Culp, violins; Amanda Grimm, viola; and Hope DeCelle, cello, currently based in Chicago.

The concert opened with Fanfare for the Common Man by Aaron Copland (1900-1990). Written in 1941, it was one of 18 fanfares submitted by different composers to the Cincinnati Symphony for their 1942-43 season. It was an instant success and is the only one of the 18 that remains in the standard orchestral repertoire. Written for brass and percussion, it is a very powerful tribute to strength of the American people, receiving a very elegant and forceful performance at this concert.

George Walker (1922-2018) was the first African American graduate of the Curtis Institute of Music in Philadelphia and became the first black instrumentalist to perform with the Philadelphia Orchestra. His Lyric for Strings is his best-known and most-performed work. Its music is very haunting, and it received a very elegant performance by the string sections of the orchestra.

New Morning for the World, composed in 1982 by American composer Joseph Schwantner, is a tribute to Dr. Martin Luther King, Jr., and is probably his most famous work. The music alone is very lyrical, and it is accompanied by excerpts for King’s eloquent and visionary speeches, resulting in an elaborate, colorful, and harmoniously adventurous, and very moving, piece. The narration for this performance was provided by the Reverend David E. Roberts, II, of The Morning Star First Baptist Church of Hickory, who provided a very powerful and engaging message filled with a visionary hope.

The crowning glory of the program consisted of Jubilate Deo by Dan Forrest (born 1978), a large work for chorus, soloists, and orchestra. Joining the Western Piedmont Symphony were Alexandria McNeely, soprano, and LaKeisha Ross Johnson, alto, both affiliated with Lenoir-Rhyne University, as well as the Hickory Choral Society, Lenoir-Rhyne A Capella Choir, and Catawba Valley Community College Choral Ensemble, providing a choir of 150 voices. The work is a marvelous setting of Psalm 100, set in seven movements and based on a wide spectrum of musical influences, using seven languages: Latin, Hebrew, Arabic, Mandarin Chinese, Zulu, Spanish, as well as English. The result is a stunning global celebration of joy.

Words cannot adequately describe what was heard at this concert. This was difficult music to perform, and the many hours of hard work that were put into preparation were obvious in the stellar performance. The power of the words and music touched the hearts and minds of all in the audience. The choirs were top-notch, as was the orchestra, conveying all of the passion and joy that the music had to offer. Rarely has this orchestra provided such a spectacular performance as was seen and heard on this night. 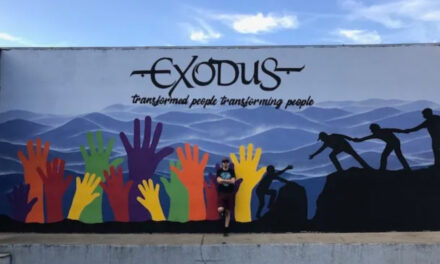