Hickory – The Western Piedmont Symphony continued its 54th season with a Masterworks Concert in the P. E. Monroe Auditorium on the campus of Lenoir-Rhyne University featuring guest conductor Arthur Post as the second of four guest conductors this season in “The Maestro Challenge.” Each is auditioning to become the next Music Director of the orchestra, succeeding Maestro John Gordon Ross, who retired after 27 wonderful seasons.

Mr. Post has been recognized as an insightful and innovative conductor who engages his audiences with compelling programs. Most recently, he served as Music Director of Canada’s Thunder Bay Symphony Orchestra. He has also conducted quite a number of distinguished orchestras throughout the United States and Europe. He is a graduate of Yale College, the Julliard School, and the Hochschule für Musik in Hamburg, Germany.

The program opened with Letter from Home by Aaron Copland (1900-1990). In order to help with the World War II effort, Copland accepted an invitation to write a piece to be played on the radio by Paul Whiteman and his orchestra. The result was a touching work that Copland said was very sentimental but should not be taken too literally. He meant to describe an emotion that might be evoked by a soldier reading a letter from home. The piece starts with a lovely clarinet solo, which is then joined by the strings. What follows is a work that brings warmth and serenity and was played quite poignantly by the orchestra.

Joseph Haydn (1732-1809) wrote three cello concertos, the first of which, in C Major, was played here. It was written to show off the talent and virtuosity of Joseph Weigl, one of the cellists in his orchestra. In the standard three movements, it is the perfect piece to show off a player’s technique, with fast runs and large chords, demonstrating that the cello is truly a solo instrument. The concerto was composed in 1765, but the manuscript was lost and not discovered until 1961, after which it has taken its place in the cello repertoire. For almost 200 years the world was denied the opportunity to hear this wonderful piece.

The soloist for this concert was Inbal Segev. Ms. Segev grew up in Israel and studied at the Julliard School and the Yale School of Music. She and Maestro Post have previously collaborated, and their performance tonight was one of comfortable understanding. Ms. Segev demonstrated that she was quite up to all of the demands of Haydn’s writing. A small chamber size orchestra was used for this performance, with great effect in recreating the atmosphere of Haydn’s time.

Closing the program was Symphonic Dances, Op. 45, by Sergei Rachmaninoff (1873-1943). Written in 1940, it was the last work that Rachmaninoff composed. The Dances combine energetic rhythmic sections with the rich harmonies for which Rachmaninoff was noted. The work is remarkable for its use of an alto saxophone as a solo instrument, providing sensual and lush episodes throughout the work, played deliciously by David Wortman. It is a dynamo of orchestral virtuosity, by turns pulsating with energy and lingering over tender melodies. It was enjoyed greatly by the audience.

There are yet two more guest conductors, both coming in February and March, 2019. We should be in for more exciting music. 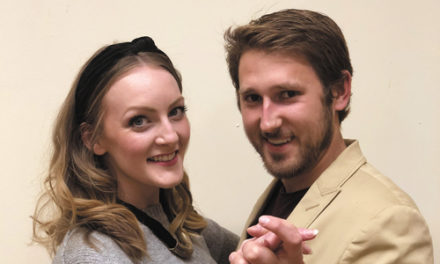