The Catalinas & The TAMS Perform, Benefiting Relay For Life, July 23 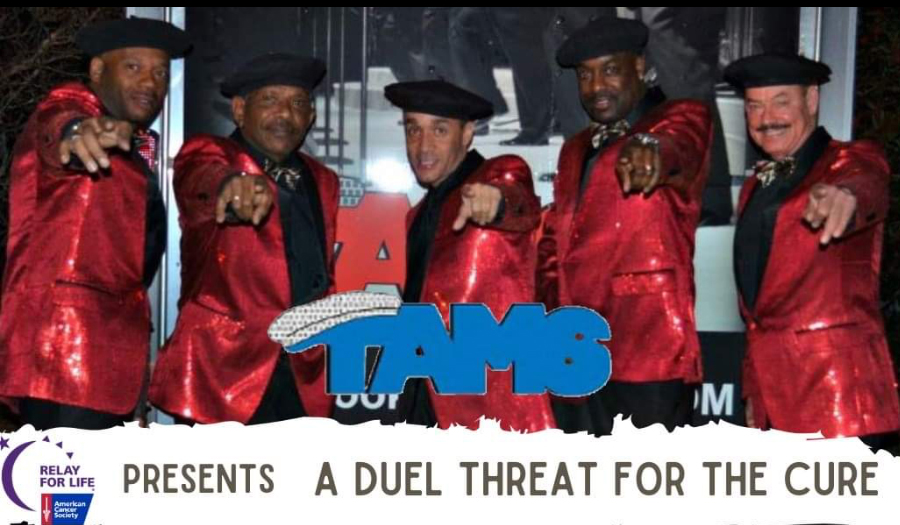 Hickory – A Duel Threat for the CURE,” is a fundraiser benefitting Relay For Life of Catawba Valley. Two Hall of Fame Beach Music Bands ~The CATALINAS & The TAMS, are joining forces at the J.E.Broyhill Civic Center, 1913 Hickory Blvd SE, Lenoir NC to headline the event to fight cancer on JULY 23rd.

Since the band’s conception in a choral room at South Mecklenburg High School in 1957, THE CATALINAS have been a dominant force on the musical scene in the southeast, having played thousands of corporate parties, weddings, festivals and private parties of all kinds. Including the latest album, Dancin’ Romancin’ , THE CATALINAS have recorded and released over 75 songs, most notably the regional hit “You Haven’t The Right” in 1967 and the trend setting classic “Summertime’s Callin’ Me” in 1975, a song which was a large part of creating what is now called “Beach Music”. The Catalinas are known for their many horns that backup the lead singers. Brothers Gary and Johnny Barker are the bands mainstay of the band, with brother Lynn Barker joined the band in the 89’s

THE TAMS have been entertaining and thrilling audiences for over 50 years! Known for such hits as “Be Young, Be Foolish, Be Happy”, “What Kind of Fool”, “I’ve Been Hurt” and “Untie Me #12 on the R&B Charts”, The Tams have had Several Gold Records,and 1 Platinum Single. “What Kind of Fool” hit #9 on the Billboard charts, and #6 on the R&B charts. “Hey Girl Don’t Bother Me” hit #1 in the UK in 1971. Though their style of music has historically been referred to as Beach Music which they have had many Beach Music hits, it can be also classified as a mixture of Smooth Soul, and R&B. Their show is fun, fresh and exciting and appeals to audiences of all ages and musical tastes. Known for their high stepping movements the TAMS are led by Lil Redd, son of original member Charles Pope, has been said to have the fastest feet in the South. The TAMS make their shows exciting to watch and been quoted “the TAMS should have a show in Vegas”! Redd’s son Mikai 3rd generation has joined the band and carries on the TAMS tradition.

The benefit raises funds for the American Cancer Society to improve cancer survival, to decrease the rate of cancer, and improve the quality of life for cancer patients.

The concert had to be rescheduled twice due to Covid but now Relay For Life is looking forward for a great show and are excited to bring to the area high quality entertainment as audiences are yearning to get back out and be entertained.

Toys For Tots Donation Deadline In Newton Is December 21