Hickory – The Hickory Music Factory will honor the Harris Brothers, Byron Bean, and Pat and Kay Crouch for their years of musical contribution to our area. The Hickory Jazz Orchestra under the direction of Rick Cline will perform with the honorees along w a guest performance by the Hickory Music Factory Youth Big Band.  Vocalist Russ Wilson will make a guest appearance with the big band.

The event is on Sunday, Jan 14, at 2pm at the Salt Block’s Drendel Auditorium.  Tickets are $10 adults and $5 for kids under 18 and can be purchased at Larry’s Music or online at www.hickorymusicfactory.com. Patrick and Kay Crouch have performed as a duo and individually for many years. Since 1989, they have completed ten tours of Ireland.   Patrick was a long time music educator and has been performing acoustic music since 1977 when he founded New River Reign, a staple at Blowing Rock’s P.B. Scott’s Music Hall.  He turned to country music with Long Time Gone and, with Ron Shuffler and Reggie Harris, created Strictly Clean and Decent in 1989.

Reggie and Ryan Harris are no strangers to the local music scene.  Some would say they are the true musical stars of our area drawing crowds from far and wide for over 20 years.  They are a real brother duo born and raised in Western North Carolina where they were exposed to a wide variety of music from an early age.

The Harris Brothers started playing string instruments and singing as small children and are part of a musical family that still gets together to play. They have been playing professionally as a duo for more than twenty years, showcasing their unique style.

The intuitive nature of their interaction, in regard to both playing and singing, can only be achieved via the relationship between brothers. Reggie sings and plays guitar, banjo, and a kick-drum suitcase for percussion;

Ryan sings and plays the bass.  Recently the two of them have been touring and performing all over the country.

Hickory Landmarks Society’s “Romance Of The Home & Garden Tour” Is Saturday, May 19 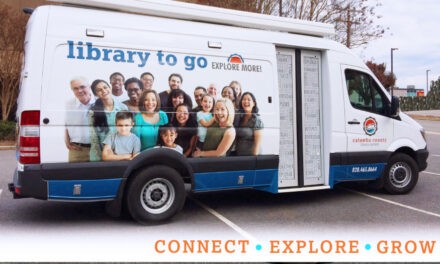 Library To Go Kicks Off Summer @ Smyrna Series, May 28