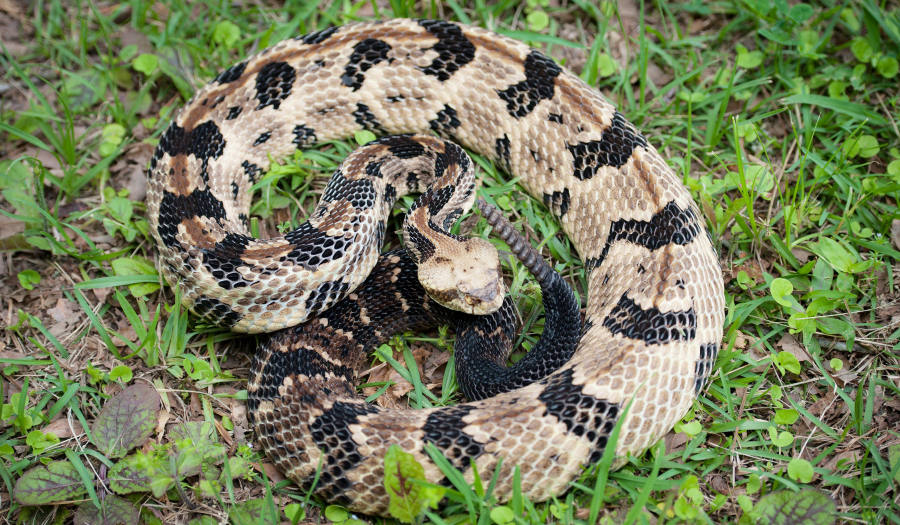 Jackson, MS (AP) – In a scene that could provoke nightmares, a Mississippi hunter walking to a truck soon found himself racing to the hospital after a venomous snake struck him in the head, a rare attack that had one scientist calling the hunter “the unluckiest guy in America.“

Tyler Hardy of Philadelphia, Miss., said he was jumping across a flooded ditch Jan. 15 when a copperhead snake coiled on a tree limb bit him above his ear.

“I thought somebody had shot me or hit me with an ax. It knocked the fire out of me. I just could not believe the force the snake had when it hit me,“ Hardy told The Clarion Ledger.

When Hardy shined a light to determine what him him, he said the snake struck at him again and fell out of the tree. Hardy and his hunting partner both identified the snake as a copperhead, which is common in Mississippi.

In the short trip to the truck, the bite started burning and swelling, Hardy said.

When the two hunters got to the hospital, Hardy received an antivenom treatment and then was airlifted to a medical center in Jackson. He was released a day later.

“I feel like I’ve been on a five-day drunk, but I’m fine,“ Hardy told the newspaper.

Herpetologist Terry Vandeventer of Hinds County said copperheads do climb trees, but he described Hardy’s bite as a “very rare and unusual circumstance.“

He said while the snakes climb during the summers, finding a copperhead in a tree in January “is unheard of.”

“I don’t doubt it went down the way he said it did,“ Vandeventer said. “But in doing so it made him the unluckiest guy in America.”