Skeleton Crew Opens This Thursday, May 13, At HCT

Hickory – It is 2008, the height of the Great Recession and the auto industry is devastated. While CEOs and corporate boards attempt to keep their companies afloat, workers down on the line in Detroit wonder how much longer they’ll be able to put food on the table. 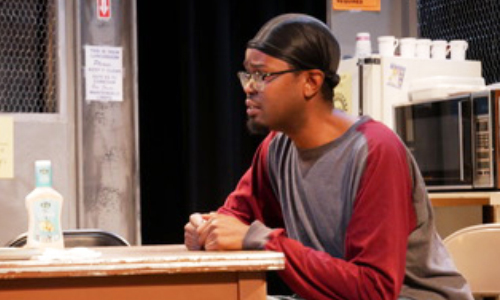 That’s the setting for Skeleton Crew, the play by Dominique Morriseau the next play in the Hickory Community Theatre’s 72nd season. Performances begin this Thursday at 7:30 pm and continue through Sunday, May 23rd.

The entire play takes place in the break room at an auto-pressing factory in Detroit. The story involves Faye, who’s been working at the plant for 29 years; Shanita, who’s expecting a baby soon; Dez, who has dreams of opening his own garage; and foreman Reggie, who is struggling with balancing his management role with his loyalty to his coworkers.

Photo: Donovan Harper as Dez in Skeleton Crew, opening this Thursday at the Hickory Community Theatre. Performances run through May 23 in the Jeffers Theatre. For tickets and information visit hickorytheatre.org or call 828-328-2283. Photo by Eric Seale.