There were many memorable moments in sports this past year. So many if fact that I forgot a few of them as I reviewed my notes from the year. Here are my favorite moments. I will start at number 14 and work down to the top moment of 2016.

Dak Prescott leads the Dallas Cowboys to best record in the NFC. Yes, the Cowboys are the top seed in the upcoming NFC Playoffs. Prescott, a rookie, stepped up when Tony Romo suffered a broken bone in his back during a preseason game in late August. Romo, if he returns in 2017, will likely be wearing a different uniform.

Kobe goes for 60 points in career finale. One of the NBA’s all-time scorers gave fans quite a send off in his final game. Kobe Bryant scored 60 points while firing up an astounding 50 shots in one of the greatest walk-off performances in sports history. A true Hollywood performance for the Los Angeles Lakers great.

Leicester City defied the odds to win the Premier League Soccer title. Though I am a fan of the Premier League, I would not have included this in the list except for the fact that the Foxes entered the season with 5000 to 1 odds of winning the championship. Historically and worldwide, the feat can be called one of the most unlikely upsets in the history of sports.

Kevin Durant signed with Golden State. This came out of nowhere. Instead of leading his own team to a NBA title, he chose to join a Warriors team full of superstars. The ever-popular Durant became public enemy number one as most feel he is taking the easy road.

Muhammad Ali passed away at age 74. The Greatest died on June 3 at the age of 74 after a decades-long struggle with Parkinson’s disease. The three-time heavyweight champion was a figure of international significance far beyond boxing, an individual whose controversial stand against the Vietnam War and efforts as a humanitarian and advocate for justice touched the lives of millions.

The US Women’s Gymnastics Team put on a show at the Rio Games. Led by Simone Biles, the 4’ 8” gymnast with the powerful, high-scoring routines and huge smile, the American women dominated the Games. The Final Five—Biles, along with Aly Raisman, Gabby Douglas, Laurie Hernandez and Madison Kocian—came into the 2016 Olympics as the women to beat, and they didn’t disappoint. Team USA easily won the team all-around. On top of that, an American medalled in each of the individual apparatus events. Biles and Raisman won gold and silver, respectively, in both the individual all-around event and the floor routine, and Biles locked up gold in the vault and bronze in the beam. Hernandez took silver in the beam, while Kocian took silver on the uneven bars.

The Golden State Warriors made history with 73-9 regular-season record. Before there was heartbreak, there was triumph. The Warriors clinched the best record in NBA history on the season’s last night, and to ice the cake, Stephen Curry hit 10 three-pointers that night to give him an NBA record 402 for the season. Then came LeBron and the Cleveland Cavaliers.

Katie Ledecky was most decorated female athlete at the Rio Olympics. The 19-year old swimmer won four gold medals—in the (200-meter, 400m, 800m free and 4x200m free relay along with one silver in the 4x100m free relay. What I remember most about Ledecky was the 12 second margin of victory she had in the 800m.

Peyton Manning goes out with a Super Bowl victory. He guided the Denver Broncos to a 24-10 win over the Carolina Panthers. Manning retired after the game and will enter the Hall of Fame soon as a two-time Super Bowl champion.

Usain Bolt dominated the track again at the Olympics. The world’s fastest human has been in three Olympics Games and has won every race he entered. Nine races, nine gold medals. The Jamaican sprinter again swept the 100 meters, 200 meters and the 4×100 relay in his last Olympics.

Villanova and Kris Jenkins win March Madness. Jenkins broke the hearts of North Carolina Tar Heel fans when he hit a buzzer-beater in the Finals to give the Wildcats a National Championship. The NCAA Basketball Tournament rarely lets us down when it comes to great moments.

Michael Phelps adds to his legacy at the Rio Olympics. Apparently, winning 22 Olympic medals wasn’t enough for the best swimmer in history. Phelps added five more gold medals and a silver to his stockpile, putting his career total at an eye-popping 28.

The Cleveland Cavaliers rally from 3-1 down to win NBA Finals. LeBron James led the Cavs to the improbable run. James came up huge when Cleveland won game 7 on the road against the winningest team in NBA history to cap off the comeback.

The Chicago Cubs finally did it. And doing it was my most incredible story in sports in 2016. The Cubs’ title was their first in 108 years. It came after a regular season in which they won 103 games and after they rallied from 3-games-to-1 against the Indians in the World Series. 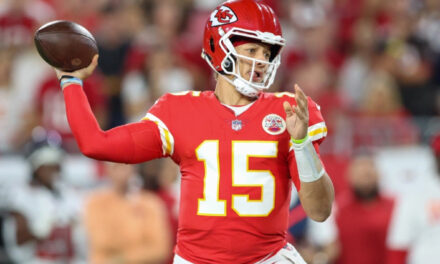