Sails Original Music Series Hosts The Get Right Band, May 13

Hickory – The City of Hickory’s 2022 Sails Original Music Series continues this week with The Get Right Band. The performance begins at 7 p.m. on Friday, May 13, at Union Square in Downtown Hickory. 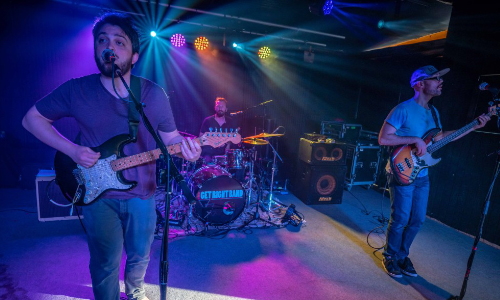 The Get Right Band is a psychedelic indie rock power trio from Asheville, North Carolina that is focused on following their muses to honest self-expression, to whatever excites them and pushes them into unexplored territory. The Get Right Band proudly carries the torch for a long line of genre-bending power trios from Cream to The Jimi Hendrix Experience to The Police to Violent Femmes to Primus to Green Day to Nirvana to Sublime. The group’s rawness and maneuverability make for a powerful music experience.

The band is built on the musical brotherhood that guitarist/vocalist Silas Durocher and bassist Jesse Gentry formed playing music together since middle school. Durocher, who is a trained composer and has been commissioned to write for symphonies and chamber groups, has guitar chops that can soothe or rage and a charismatic swagger as a frontman and a singer. With the addition of Jian-Claude Mears, a drummer with “precision, passion, and an inescapable momentum” according to Live For Live Music, the group’s sound has become an unstoppable force. The Get Right Band has been wowing audiences around the country and the Caribbean since their inception in 2011 with an unparalleled live show and a relentless tour schedule.

“Combining super-catchy songwriting, superb musicianship, and fearless improvisation, this band will get you out of your chairs and have you shaking everything you’ve got,” says Sails Music Coordinator Bob Sinclair. “The Get Right Band rocked the Sails Stage last year and we can’t wait to welcome them back this year. From funk to rock n’ roll to reggae, you best be ready for fun!”

In addition to the seating available at Union Square, audience members are encouraged to bring their own lawn chairs or blankets. A variety of close-by bars and restaurants offer food and beverages.

The new Hickory Downtown Social District allows patrons of downtown ABC permitted establishments to drink an alcoholic beverage on sidewalks, Union Square, and other public areas within the designated boundaries of the social district.

For more information about the Hickory Downtown Social District, special restrictions, and a detailed map of the coverage area, visit https://www.hickorync.gov/downtown-social-district.

Photo: The Get Right Band returns to Hickory to perform for the Sails Original Music Series on Friday, May 13.