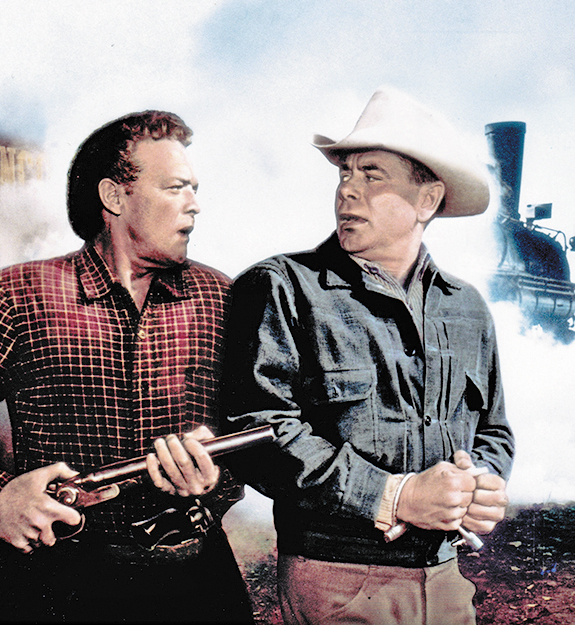 Winston-Salem, NC – RiverRun International Film Festival welcomes Peter Ford, son of film stars Glenn Ford and Eleanor Powell, for a book signing at Scuppernong Books in Greensboro on February 19, as well as an on-stage discussion, film screening, reception and book signing at the Southeastern Center for Contemporary Art (SECCA) in Winston-Salem on February 20.

The SECCA evening on February 20 begins at 7:00 p.m. and includes an on-stage discussion with Peter Ford and RiverRun Executive Director Rob Davis followed by a screening of “3:10 to Yuma,” the iconic Western starring Glenn Ford. The evening will also include a reception and book signing with books available for purchase from Bookmarks. Peter Ford’s book, Glenn Ford: A Life, was a critical and commercial success and remains one of the all-time bestsellers of the University of Wisconsin Press, a noted publisher of film books.

Upon its release in 1957, “3:10 to Yuma” was described by Bosley Crowther in The New York Times as “a good Western film, loaded with suspenseful situations and dusty atmosphere.” Leonard Maltin characterized the film as “gripping every step of the way.” The 92-minute story revolves around a rancher trying to bring an outlaw to the train that will deliver him to prison, a seemingly simple mission which turns into a psychologically complex game that will test each man. Van Heflin plays the rancher and Glenn Ford, in a magnificent performance against type, plays the outlaw.

Peter Ford was born in Los Angeles and grew up in Beverly Hills where his parents regularly entertained the likes of Clark Gable, Bette Davis, Barbara Stanwyck, Judy Garland, Al Jolson and many other entertainers of Hollywood’s “Golden Era.” He was taught to swim by Johnny Weissmuller, MGM’s Tarzan, neighbor James Mason was his babysitter on occasion and next-door neighbor Charlie Chaplin was considered a “villain” by Peter after he accidentally killed Peter’s beloved dog, Bill. During his dad’s filming of “Blackboard Jungle,” Peter’s record collection was used by director Richard Brooks and producer Pandro Berman to assemble the film’s soundtrack, including “Rock Around the Clock.” “Blackboard Jungle” is acknowledged as the first film to use a rock and roll soundtrack and widely credited with ushering in the rock and roll revolution. Peter’s interest in music led to a contract with Capitol Records and his group, The Creations, appeared at such venues as the legendary Whiskey A Go-Go and the El Cortez Club in Las Vegas. Peter’s show business career also included film and television appearances before an interest in home design prompted him to become a licensed contractor. His company, Blackoak/Ford became one of the most highly respected residential construction firms, and its work was featured in a number of architectural magazines across the globe. Peter had a longstanding interest in family history and genealogy and had published several articles before writing what most consider the definitive book about father’s life and career.

SPONSORS: RiverRun Retro is sponsored by Nelson Mullins and supported in part by an award from the National Endowment for the Arts. Hospitality sponsors include the Fairfield Inn and Suites Downtown Winston-Salem, McRitchie Winery and Ciderworks, Hoots Beer and Mooney’s Mediterranean Café.