A child’s interest changes more often than the tide and is unpredictable as the wind. Case in point, a few weeks ago, due to a day care show and tell incident, the Tot (that’s the live-in grand-saw) suddenly took an obsessive liking to the Transformers. Or at least as much of an obsession as a four-year-old can muster. What little he knew of the sentient robot alien race from Cyberton was prattled on about in endless repetition. This would lead Lil Red, a.k.a. Grammie, to purchasing an Autobot (that’s the good guy Transformers for those of you who missed the 80s) from the local pharmacy. Why they are selling Autobots or any other kinds of bots alongside prescription medications is beyond this writer’s comprehension.

Now armed with a Transformer all his own, he proceeded to dazzle us by repeatedly transforming said Transformer; a feat that he continuously found amazing and impressive. This also led to his request to be sung the 1980’s Transformers theme song over and over and over again. If you’ve never heard it there are not many words to this particular theme song and they must be sung in a semi-techno/robotic voice with robotic sound effects. Guess who got that duty. Well at least it was a little better that trying to sing the original He-man theme, whilst accompanied by a guitar that I could not play.

And the band played on while the child rattled off his favorite Transformers, who they were and what they transformed into. We were oft reminded, “they’re more that meets the eyes!” Of course he likes Bumblebee, Grimlock (it’ a robotic dinosaur…what’s not to like, in the eyes of a toddler) and of course the leader of the Autobots…Optimist Prime. Whoa! Hold on! Did he just, in a knowledgeable and informed type voice, say “Optimist Prime”? Grammie of course tries to carefully correct his mispronunciation of “Optimus.” Pappy (that’d be me) pushes the bill and asks if he also likes Pessimist Prime, despite his negative attitude. A look of utter confusion crosses his little face and the joke is quickly abandoned. However the concept is planted in my mind and thoughts crop up.

Are you a glass half empty or glass half full kind of person? Or do you see it from this writer’s perspective which is “there is no glass and there’s s*** everywhere”? At what point in life do we reach that path of divergence where we either decide to see the bad in everything or find the good in all things? It would seem that this particular aspect of life is clearly divided into black and white with little room for grayscale. Our individual experiences most likely define our positive or negative outlook on the world at large. But it seems that for the most part we’re all positively open-minded in the beginning.

Children, (which we all once were), are the eternal optimists. They view everything in a positive light and firmly try to believe that the outcome of any given situation will be for the better and that everyone will be happy. They find wonder in the simplest of things and are amazed by everyday occurrences most adults take for granted. This beautiful illusion can last well into adulthood and there’s nothing wrong with that. Those of us who view the world under a black light tend to hate these happy go lucky fools. The truth is we envy them and wish we could share the blinders they walk into the world with.

Is it possible in our modern day society to accentuate the positive and eliminate the negative? Not entirely. To never find any sense of negativity would seem delusional and foolhardy. It would also seem psychotically emotionless to believe one could exist without any sorrow or compassion in their life, two conundrums which fall more towards the pessimistic side of things. Then again if one could negativity emote, whilst simultaneously looking beyond that negative moment in time. Finding the potential happiness that lies beyond that instant would that keep them on the optimistic side of things? Perhaps pessimists focus too hard on the matter at hand rather than seeing the optimist’s bigger picture view. Hmm, so who’s wearing the blinders now?

It seems a careful balance of the two opinions may be not so much the positive as the correct direction in which to go. Never really straddling the fence and yet placing oneself in a position to see both sides. Maybe peering through the slats or standing on a small ladder.

All I can say is that I’m positive it can be done, just skeptical as to whether or not we can do it. 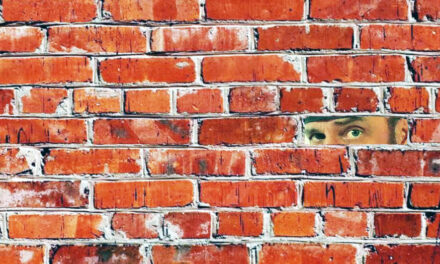