Portland, OR (AP) — A passenger waiting for a flight at an Oregon airport needed a bit more screen space for his video game so he plugged his Playstation 4 into a computer screen that had been displaying a map of the airport. 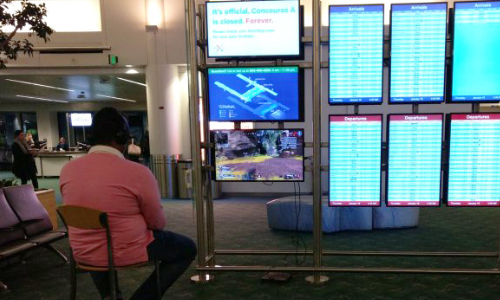 Kara Simonds, a spokeswoman for the Port of Portland, told KXL-AM radio in an on-air interview that Portland International Airport staff asked the man to stop gaming on the public map display.

He asked if he could finish his game. They said no, and the situation resolved peacefully.

“Apparently it was a very polite and cordial interaction,” Simonds said, calling it “a good reminder of what not to do at the airport.”

No word on whether or not the passenger made it to the next level.