Considering how poorly made and conceived the 2014 horror opus Ouija turned out to be I found myself quite surprised at the positive word preceding the release of the film’s prequel, Ouija: Origin of Evil. Was it possible that the filmmaking team behind this latest entry would actually attempt to do something other than to cash in on the box office returns of the first film? The answer to that question is a resounding no and one would best be advised to not believe the hype.

As one could probably ascertain from the film’s title, Ouija: Origin of Evil is a prequel of sorts in what looks to be a franchise, assuming the latest one brings in the bucks. While the film may be lame as they come in the storytelling department it does deserve some faint praise for some of the technical details, most notably some nifty choices of certain shots (film buffs will especially dig the use of the split diopter lens). The film also has a generally retro feel right from the get go as the old Universal Pictures logo from the 60s/70s scrolls across the screen. There’s also an attempt to make the film look like an actually movie print when, every twenty minutes, a circle in the top right corner appears.  It’s a nice touch for those of us old enough to remember when film prints actually had to be assembled and weren’t beamed into theaters via satellite.

All of the technical prowess in the world, however, can’t disguise the fact that this is a lame movie with virtually no scares. There are a few during the last twenty minutes or so but it’s a long and tough sit to get there. The film takes place in 1967 where the recently widowed Alice Zander (Elizabeth Reaser) is attempting to run a fortune telling business out of her home while raising her two daughters as a single mom. Alice makes no bones about the fact that it’s all a scam, which doesn’t seem like a particularly good example to set for your kids, but I digress. At any rate things begin to heat up when Alice purchases a Ouija board to use in her psychic business and things take a turn for the worse.

At least Henry Thomas (Elliot in the classic film, E.T.) turns up as a priest to liven up the party somewhere in the midst of the proceedings.

As a film, Ouija is slightly better than the lame 2014 original but that really isn’t saying much. It wouldn’t take much effort to best that film and perhaps that’s why the filmmaking team behind this prequel seem to be making such a low key effort. When you’re starting at the bottom I guess the only way is up.

Photo: Scene from Ouiga: OoE, with Henry Thomas at right 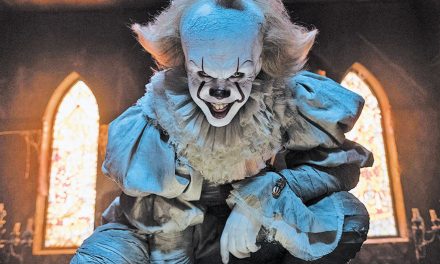 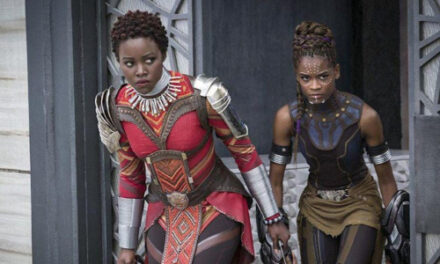