Quentin Tarantino’s latest film is, much like all of the other films on his resume, wildly unpredictable and in a class all of its own. Taking place in 1969, Once Upon a Time in Hollywood is a triumph in production design and, if nothing else, allows the viewer to inhabit its world in a way few films achieve. If you’ve ever wondered what it might have been like to live in Southern California some fifty years ago, this is your chance to find out. As to whether it succeeds on the merits of its own story content, well, that’s another story.

Leonardo Di Caprio stars as Rick Dalton, an actor with a once promising career who’s now pigeonholed in the genre of television westerns. His stunt double, Cliff Booth (Brad Pitt, steals the film in every scene in which he appears), also seems to know on some level his time is quickly passing as well. To add several other variables to the equation, Dalton just happens to live next door to actress Sharon Tate and Booth picks up a hitchhiker with ties to Charles Manson and his cult of followers. If you think you know where this is going think again.
As stated, Tarantino captures the time and the place in impeccable fashion. Unfortunately the film never manages to congeal as a whole and, once again, we have a Tarantino film that could benefit from a judicious trim here and there. Especially an interminable scene from a television show in the middle of the film. And then there’s the ending wherein the filmmaker repeats a trick from an earlier film in his career. Some of it works, and some of it doesn’t but when it does, does it ever.

Once Upon a Time in Hollywood is playing everywhere. 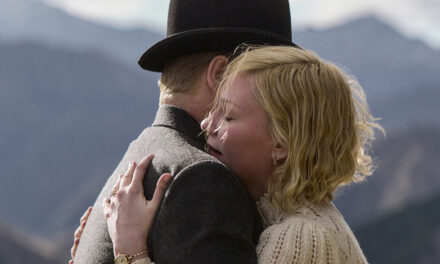