Remember the summer of 2014? Back when the NFL faced massive public outcry over its handling of the Ray Rice domestic violence case? Back when Commissioner Roger Goodell unveiled a new policy aimed at ensuring that he and his league would not repeat the same mistakes in the future?

The NFL initially suspended Brown for one game at the start of the 2016 season, upon completing an investigation that began after the league learned in May 2015 that Brown had been arrested at his home on charges of abusing his wife, Molly. In the course of the investigation, the NFL said in August, the league determined that Brown had violated its Personal Conduct Policy, but that because Molly Brown and law enforcement declined to participate in the probe, it “had insufficient information to corroborate prior allegations,” and would not discipline him further.

Brown served the suspension and returned to the field, and the case was largely forgotten. Until last week, anyway, when newly released police documents showed that Brown had admitted to a history of abuse against his wife.

As was the case with the Rice case, the NFL was forced to revisit the case after initially giving the player a very short suspension. On Friday, it placed Brown on the commissioner’s exempt list, effectively putting him on paid leave and removing him from the Giants’ roster while it resumes its investigation.

The new information within the case naturally raised questions about why Brown received such a light suspension and if the NFL and Goodell have made any progress in the way they handle incidents of domestic violence involving players.

There is talk amongst the NFL owners, the same owners that employ Goodell, that new policy was primarily a public relations act, aimed not at reshaping the league’s approach to or attitude toward domestic violence but at answering the outcry.

Judging from how the league dealt with Brown, one has to believe that it was just an act.

The new policy laid out a road map for domestic violence incidents. The league would suspend first-time offenders for six games, and a second offense would result in a lifetime ban from the NFL. It was an admission, Goodell said then, that the league had gotten the Rice case wrong, and that it would make meaningful changes as a result.

As it turns out, the six-game and lifetime suspensions were mere suggestions. Goodell left enough wiggle room in the policy to allow him to consider “mitigating factors,” and evaluate each case on an individual basis to determine whether players should be suspended for more, or fewer, games. And Brown’s case, along with others, revealed that nothing has changed.

What is equally as troubling is that it seems like the NFL does not really want to get at the truth.

In the Rice case, the league was criticized for conducting a halfhearted investigation into the incident. This time, it maintained that it had reached out to law enforcement authorities in King County, Washington, where police were investigating Brown, but did not receive enough cooperation. However, reporters have obtained relevant investigation documents through routine public records requests that the NFL could have performed on its own, and a King County sheriff said Thursday that the league official who did request information never made it clear he represented the NFL.

And then there is how the league conducts their investigations. The league’s decision to bring Janay Rice in for questioning alongside her husband, meanwhile, may have contributed to Molly Brown’s decision not to cooperate with the NFL.

There are multiple issues within the most popular of our professional sports leagues. Shifting its teams’ attitudes toward domestic violence and the treatment of women was one of them. Thus far, the shift has not occurred. Meanwhile, numbers tell us that fewer people are watching the NFL on television. There are a number of reasons for the viewership drop, but it is clear Goodell and the NFL are struggling with their public relations.

North Carolina kept its ACC title hopes alive last week behind the arm of quarterback Mitch Trubisky. The Heels also put up a solid defensive effort en-route to a 35-14 victory over at host Virginia.

Trubisky threw for 310 yards and three touchdowns as the No. 22 ranked Tar Heels raised their record to 6-2, (4-1 in ACC play). Carolina led 14-7 at halftime and limited Virginia to 39 yards in the third quarter while opening a 28-7 lead. Elijah Hood ran for 107 yards and a 4-yard touchdown, and T.J. Logan scored on a 4-yard run for UNC.

The Tar Heels moved back ahead of Virginia Tech in the Coastal Division race by virtue of having one more victory. The Hokies (3-1 in division), however, beat UNC three weeks ago, so they hold the tiebreaker, but either Virginia Tech or Pittsburgh (2-1 in division play) will fall off the pace in the loss column when they meet Thursday night at Heinz Field. The Tar Heels beat the Panthers 37-36 earlier this month on Trubisky’s TD pass with two seconds remaining.

The Tar Heels should be favored in every game they have left and should climb within the Top 25.  They still have to face Georgia Tech at home, play at Duke, host The Citadel and finish at North Carolina State. 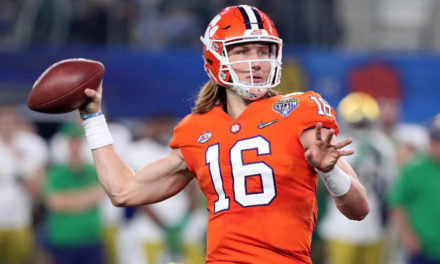