Newton, NC – The 130th Soldiers Reunion returns to downtown Newton with family-oriented activities. The theme “We Remember” will be the theme of Soldiers Reunion 2019, Catawba County’s historic patriotic festival. Reunion Week will kick off Sunday, Aug. 12. Events continue through Thursday, Aug. 15, the traditional “third Thursday of August” date that has reigned since the 19th century.

Events will include dances, beauty pageants, a cruise of classic vehicles, musical entertainment, athletic events, and a highlight parade focusing on the theme of American patriotism.The following is a list of events:

Classic cars and classic music go together and you can get your fill of both on Sunday, August 11 in downtown Newton for the 130th Soldiers Reunion Cruising event. The regional band, Music Unlimited will be performing at the Frank and Sue Jones Amphitheater located adjacent to the west side of the 1924 Courthouse Square.

The band will play from 3 till 6 PM, when the old cars will start their two-way cruise through the streets of downtown Newton.

Music Unlimited performs a wide range of music to bring back those crusin’ memories. You’ll hear great songs like Johnny B Goode, Green Grass of Home, Mustang Sally and many more.

Bring your lawn chairs, your blankets and your dancing shoes for a great afternoon of music and automotive fun for this free event.

If you are a fan of southern gospel music, and enjoy listening to talented artists, downtown Newton will be the place to be during the third week in August.

“I am pleased to say that gospel music night at the county’s annual Soldiers Reunion patriotic festival is much anticipated, warmly enjoyed, and this year is bound to be a favorite,” declared Maiden’s Michael Burke, who annually coordinates the free, outdoor event in downtown Newton.

The gospel sing for the 130th annual Soldiers Reunion is set for Monday night, August 12, starting at 7 p.m. on the east side of Courthouse Square on the lawn of the 1924 courthouse (now the county Museum of History). “Everything is as usual for the appreciative public to enjoy,” he added, as he encouraged folks to bring lawn chairs and blankets for seating to hear “two outstanding gospel groups.”

He continued by saying that two acts will co-headline this year. Joseph Habedank, a GRAMMY nominated, Dove Award winning singer/songwriter and The Whisnants, a 14 Number One Top 40’s recording group will entertain through the night.

Are you ready to Shag? “The Embers, one of the top beach music bands in the South and one of the most requested acts for Soldiers Reunion, will return to headline Beach Music Night for the Catawba County’s 130th Soldiers Reunion,” announced Wayne Dellinger.

The Embers will take the stage in downtown Newton on the evening of Tuesday, August 13, to help celebrate and honor local war veterans. The free show will begin at 7:30 p.m. at the intersection of College Avenue and East A Street on the southeast corner of The Square.

The dancers and the crowd who will just want to listen to the music are encouraged to bring lawn chairs and blankets for seating.

Grand Marshal for the 2019 Soldiers Reunion parade on Reunion Day, Thursday, August 15, in Newton will be a car dedicated to the memory of Benjamin “Ben” Wilfong Huss.

Huss passed away last year just before Soldiers Reunion week and did not participate as he usually did. Huss, a Newton business man for over 50 years, owned and operated Carolina Furniture and Huss Bail Bonds and eagerly supported Soldier Reunion activities his entire life.

Riding at the head of the 130th annual patriotic festival parade, will be one of the many cars that Huss drove and displayed at Soldiers Reunion Cruzin’ nights and drove in the parade. His car will lead off the dozens of floats, firetrucks and bands.

“We are delighted to pay respect to Mr. Huss and his family as they have helped support and sponsor Soldiers Reunion for many years,” declared Wayne Dellinger, a former Newton mayor and long-time general chairman of the week-long festival paying tribute to our military veterans.

Huss will be remembered by the crowd of spectators on Courthouse Square during the 4 p.m. Reunion Day official ceremony along with this year’s seven Miss Reunion queens and their royal court, before leading the parade through the downtown area which begins at 5 p.m. on South College Avenue, proceeds through the business district and proceeds southward down Main Avenue. 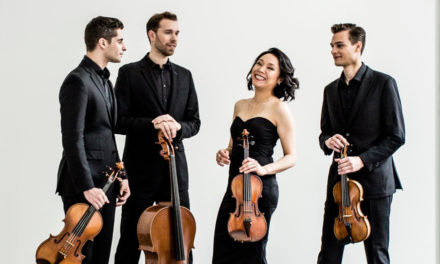 The Tesla Quartet Returns With A Fresh New Program, January 19