Wadsworth, NV (AP) – U.S. and tribal officials are celebrating completion of a $34 million fish bypass system at a Nevada dam that will allow a threatened trout species to return to some of its native spawning grounds for the first time in more than a century.

Construction of the side channel with fish-friendly screens is a major step toward someday enabling Lahontan cutthroat trout to make the same 100-mile journey, upstream from a desert lake on tribal land northeast of Reno to Lake Tahoe atop the Sierra, that they did before the dam was built in 1905.

“This is a great day for conservation,’’ said Paul Souza, the regional director of the U.S. Fish and Wildlife Service who said it wouldn’t have been possible without support from the Pyramid Lake Paiute Tribe. 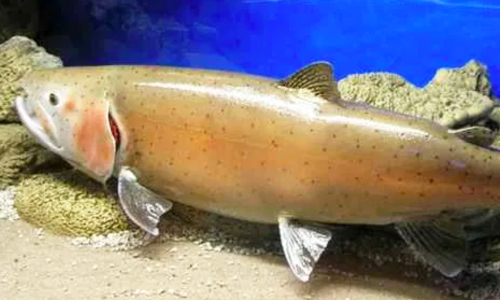 “This is an iconic species. This project is going to help get it home,’’ he said at a ceremony Wednesday at Derby Dam on the Truckee River 20 miles east of Reno.

The U.S. Bureau of Reclamation began reconfiguring the dam just a year ago in partnership with the USFWS, Pyramid Lake Paiute Tribe and Farmers Conservation Alliance, a nonprofit group that developed the screens.

Brenda Burman, head of the bureau, said the quick work combined the alliance’s innovative technology with the service’s biological experience and the bureau’s engineering and construction expertise.

“And in the background, pushing and making sure this all happened, we had the relentlessness of the Pyramid Lake Paiute Tribe to recover the fish that they hold sacred,’’ she said.

The largest trout in North America, Lahontan cutthroats grew as big as 60 pounds when they climbed 2,500 feet through mountain river canyons to Lake Tahoe on the California-Nevada line, elevation 6,228 feet.

In recent years, they’ve made their way several miles upstream from Pyramid Lake but haven’t been able to get past the 30-foot-high dam.

Commissioned by President Theodore Roosevelt, the dam was part of the first major irrigation system established in the West to “help make the desert bloom,’’ diverting water to farmers and ranchers in a region where only about 5 inches of rain falls annually.

The new bypass houses an 80-foot-wide, 390-foot-long horizontal fish screen, actually a metal plate with slots that pushes water down through the water system while sending the fish and other debris through the side channel.

The Farmers Irrigation District of Hood River, Oregon, first developed the design after severe flooding in 1996. The district licensed the patent to the alliance, which since has completed 50 projects in seven Western states.

This one is the largest and the first commissioned by the Bureau of Reclamation.

“It is really amazing to think a year ago we stood here not knowing about pandemics, fires, all the challenges that would come up ahead of us. And yet we are all here today seeing these screens turn on,’’ said Julie O’Shea, the alliance’s executive director.

“It provides a spark of hope for future generations about what the possibilities are for restoration and recovery of a species.’’

Tribal leaders and state and federal wildlife officials have been working for two decades to restore the fishery in Pyramid Lake, a remnant of ancient Lake Lahontan, an inland sea that covered 8,450 square miles of western Nevada during the Ice Age.

The trout was thought to have gone extinct in the 1940s and was listed as threatened in 1970. But a remnant population later was discovered in a small brook along the Nevada-Utah border.

Cutthroat trout also are native to parts of Oregon, Utah and Wyoming.

Tribal Chairman Anthony Sampson said the project is “safeguarding a precious resource of the tribe.’’

“We have to be vigilant to protect and restore what God created for us,’’ Sampson said. “Everything we do has an impact on life, not just plant life, not just animal life, but all lives.’’