Life By The Book

It seems there has never been a time when I have not written. When I was in my teens I kept diaries, although I have no idea where they ever ended up. I suspect my mother, a rather strict and particularly strident woman, disposed of them. It is not like, at the age of 15, they were full of sexual intrigue. I did skip school once, but I was smart enough not to write it down. It was all strictly mundane stuff, but it helped me get through the angst of my teenage years to write things down and reflect on them.

There have been large gaps in my life when I didn’t keep a diary. The 10 years after the demise of a very brief marriage were not documented. I wish I had written about them. I was broke but happy then. The most paramount event during that time was the sudden death of my father. At age 57, he died of a massive heart attack one morning while getting ready for work. I didn’t have to document that in writing. To this day, I vividly remember every single detail. Luckily, I was a pretty good photographer and have some black and white prints and color polaroids to help me fill in the missing years.

You just never know where life is going to take you. After a decade of the single life, I met and married the young man who moved into the house across the street from my apartment. (Ha! My mother always thought I would end up with someone I met in a bar!) We struck up a relationship immediately in January of 1988 and by December of that year we were engaged to be married. Life was looking up. A calm contentment lay over me like a warm blanket. We had a house and a dog, two cars in the driveway and decent enough jobs to keep a roof over our heads.

In 1990, shortly after I was married, I settled in and began to keep a diary again. There were so many things going on in life as I began to follow a new direction. I found my old diaries in a rucksack in the back of the closet the other day. There are six of them, counting my current one. WOW! What a revelation. There are so many memories in those books that now, at my age, I would certainly have forgotten had they not been documented.

These books are full of little doodles, photos, and ticket stubs from some great concerts such as John Hyatt and Bonnie Raitt, Robert Cray and Steve Winwood, John Mayall and the Blues Breakers, The Grateful Dead, Doc Watson and Chet Atkins. I had told my husband that I wanted to see Eric Clapton before he died or I did. Clapton has got more than a dozen years on me and neither one of us were getting any younger so when his Reptile Tour came to Charlotte on Friday, May 25, 2001, we bought tickets. They were $80.00 a piece for the cheap seats back then. I can only imagine what they would be today. I have every moment of that concert documented in a diary. I mean right down to what the man was wearing! I must share:

“We went to see two hours of ol’ ‘Slowhand’ performing his best hits Friday night – ‘Bell Bottom Blues,’ ‘Sunshine of Your Love,’ ‘You Look Wonderful Tonight,’ ‘Cocaine,’ ‘My Father’s Eyes,’ ‘Tears In Heaven,’ ‘Change The World,’ ‘Got You On My Mind,’ ‘Traveling Light,’ ‘Don’t Let Me Be Lonely Tonight.’ He did two encore songs, ‘Layla,’ followed by a special rendition of ‘Over the Rainbow.’ For brief moments, when I would close my eyes and concentrate on Clapton’s musical genius, the beauty of it was almost overwhelming.”

I even wrote down every detail of what the man was wearing and how he appeared! “Clapton was dressed in relaxed fit jeans and a turquoise short sleeve cotton shirt worn with the shirttail out. He had about two days beard growth and wore simple shoes and wire-rimmed glasses. He wears all his jewelry on his right hand and wrist. On the right wrist he wore a simple leather bracelet. There was a big gold and diamond ring on his middle finger and gold rings on his ring and pinky fingers.”

Needless to say, I was star struck. Buried in a stack of vinyl LPs down in my basement are some of his old albums, including one when he played with Cream. I acquired the “Fresh Cream” album in 1970 when I was 14, so that gives you some idea of how long it’s been since I became aware of Clapton. The album itself was released in 1966.

Anyway, I am happy I got that checked off my bucket list and that I documented it in full detail. Reading about it puts me right back there in that coliseum seat.

One night in May 1990 I wrote: “Tonight for 10 minutes I am going to write down everything I hear – a lesson in sensory perception.” And this is what I heard; “a strong wind blowing through the treetops, the water shifting in the waterbed, the sound of my arm as it moves across the page I am writing on, the sound of my hand moving across the paper, a loud car, a dog barking at the car, a sigh, the drone of the television, the page as it turns, the felt tip pen as it moves across the page, fingernails scratching skin, a car door slam, a VW backing out a driveway and buzzing up the hill, the tinkle of dangling earrings, another sigh, a joint popping, wind chimes in the trees. Time’s up. Goodnight.” Granted, it was just a mundane entry, but it did give me some insight into how much goes on in life that is seldom heard or taken for granted.

Apparently in days of yore I was more philosophical. I wrote quite a few little poems along the way. None of them have titles. I’ll share a couple:

“My silver star is shining bright but shoots a blaze and falls from sight.”

“Within the scope of my universe, you are but a tiny fleck of dust dancing on a sunbeam. You rise and fall there on that blade of light and linger suspended in the air. And, at the moment my eye catches you there a cloud passes to remove the light and you are gone from my sight.”

There are so many days in almost 30 years that nothing much happened at all to write about. But, there are plenty of good times documented in these tomes I have collected over the years such as the parties I went to, the movies I saw, the books I read, the recipes I tried, the births of children, etc. And, some sad times are written there too. The passing of friends in and out of my life, the death of beloved pets, the death of relatives and friends, and the Iraqi war have merited entries.

With age, comes a certain forgetting of people, things and places. I am so glad to be able to open to a page in any one of these diaries and say, “Oh, I remember that now.”

My current diary is a hand-tooled Italian leather-bound book purchased in May. It wasn’t cheap, but I figured after all this time I should have the kind I have wanted so long but couldn’t afford. I haven’t written much in it so far. The last entry was July 6, 2019: “All too often we shove off the most precious moments in life for thinking about the next thing. And, the thing is there may never be a next thing.” 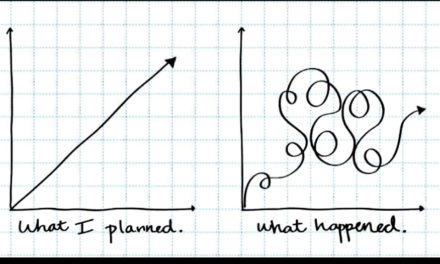 And Then What Happened?