Michael B. Jordan is an actor who gets more of my respect with each passing film project in which he’s a participant. He’s an actor who easily could sell out and take the big payday but instead chooses riskier projects dealing with weighty subjects. His latest starring role in the ripped from the headlines tale, Just Mercy, is another feather in his cap, so to speak. Here he plays real-life law student Bryan Stevenson, and his performance is one of the reasons why the film sings as well as it does. Yes, it’s a story we’ve seen many times before, an advocate for those wrongly imprisoned finds himself transfixed by a particular case, but Jordan’s performance is so moving and filled with humanity that you forget the familiar story beats and go along with it. That’s the testament of a good actor and Jordan more than amply steps up to the task. 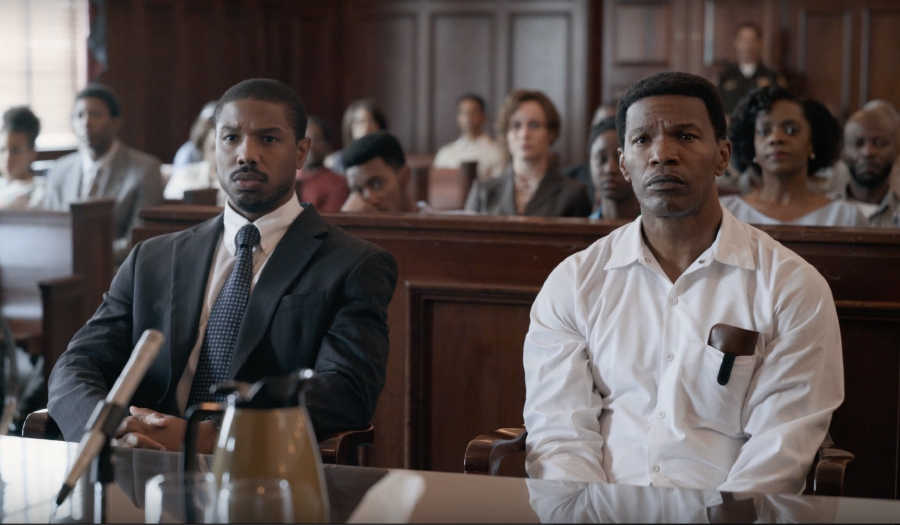 Michael B. Jordan and Jamie Foxx in Just Mercy

Stevenson, as the film opens, is a Harvard law school grad who wants more than to collect a paycheck chasing ambulances. He discovers a higher purpose upon learning about the large number of people in prison whose guilt is questionable. In particular, he becomes obsessed with the case of Walter McMillian (Jamie Foxx, also quite good), a handyman who was on death row having been convicted of the murder of an eighteen-year old girl, despite a preponderance of evidence to the contrary. The film brims with humanity and it’s hard not to be moved in spite of a familiarity with this type of film. It’s a testament to the great skill of its performers that it works so well in spite of itself.