The second, and much anticipated, final chapter of the two part big screen redo of Stephen King’s essential eighties novel, It, has arrived. The sad and unfortunate thing is that it has landed with a resounding thud. Following on the heels of the mostly effective first installment from two years ago, which received a *** review from yours truly in these pages, director Andy Muschietti and scripter Gary Dauberman have opted to amp up the jump scares to a level that quickly becomes overkill without having much of anything else to offer. The jump scares might have worked had there been more depth to the adult versions of these characters found in this continuation of the story, but everyone comes across as a caricature as opposed to anything resembling a fully fleshed out human being to the overall detriment of the film. It’s a misfire that only the most loyal fans of King’s source material will defend.

To briefly recap the first film’s plot, a group of misfit kids band together to defeat an evil presence that appears as the thing that frightens a person the most. One of the characters is afraid of clowns, thus the appearance of the celebrated character Pennywise, the dancing clown. The bonding of the misfit kids in the film’s late 1980s setting, in an effort to defeat evil, was surprisingly touching at times, bringing back memories of the King adaptation of Stand by Me.

I wrote at the time that Bill Skarsgard more than capably filled Tim Curry’s shoes, Curry played Pennywise in the 1990 TV movie adaptation, in the role of the iconic clown character. I really liked what Skarsgard brought to the role. The facial twitches and ticks and the sheer physicality of it all. In this installment he’s relegated to nothing more than a cheap scare whenever the story calls for it and isn’t afforded nearly the amount of opportunities to shine that he had in the first film.

We are told by a title card that It: Chapter Two takes place twenty seven years after the previous film’s events. Pennywise rears his head when a gay couple is assaulted and one of them is left for dead. The reappearance of the evil entity causes alarm and since the kids made a pact all those years ago to return to their hometown if Pennywise were to materialize again, they do just that at the behest of the only member of the group, Mike, who remained in the small town. As in most films like this everyone has done well financially for themselves and must leave their thriving careers in order to take care of business. Boy if life were that simple.

The casting of the adults in these roles, Bill Hader, James Macavoy and Jessica Chastain among them, is admittedly good but they all have so little of consequence to do one can’t help but wonder what was the point. That’s a question I asked myself a lot during this one.

It: Chapter Two is playing everywhere.

Questions or comments? Filmfan1970@hotmail.com
Bill Skarsgard as Pennywise in It: Chapter Two 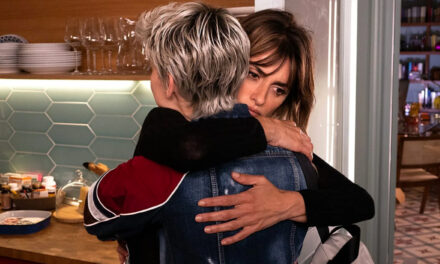