Recently, suddenly and without warning, a meteor streaked across the southeastern U.S. early morning sky in a west to east trajectory, ending its flight in Ivanhoe, North Carolina.

Many across the east coast witnessed, watched and oohed and aahed this astronomical spectacle. However, despite the rarity of a meteor of that size entering the atmosphere and regardless of the increased frequency in which this anomaly is occurring, the majority of the general public has forgotten about it in less than a week. This, of course, is with the exception of members of the AMS (American Meteorological Society), because it’s their job, and devout UFO conspiracists.

“When speaking on subjects that are based on theory and grounded in speculation, that means just about anything you say is sort of probably half right.” – Chainsaw.

Most people dismiss the idea of UFOs, extraterrestrial life and alien encounters/invasion on the basis of two basic trains of thought: Conceited human ignorance in the belief that, in all the vastness of the universe, homo sapiens are the only intelligent life (though the ‘intelligent’ part is highly questionable). Or fear of the unknown; a close encounter of any kind would shatter their beliefs and security. They don’t want to believe that we are not alone, that there could be something… some other form of life… out there.

For the most part the general populace likes to believe that if there were an actual alien invasion that it would play out much like it does in the movies. The aliens would arrive making sure their presence is known to everyone. Slowly they’d position ships over places that earthlings think are bastions of society (because they care what we think our weaknesses are), leaving plenty of time to gather our world leaders while the aliens got their s*** together­­– because after traveling millions of miles, through the vast black emptiness of space, they’d have no idea what they were doing till they got here. Then, when we were ready, they’d attack!

Of course they’d use the same type of military strategies as our military would, because it’s only fair if we know what’s going on and how to counter it. Our pilots would definitely have the upper hand over those interplanetary alien pilots. And our jet planes would surely outrun their space ships.

The extraterrestrial ground troops, despite superior size, strength and advanced alien armor and weaponry, would be no match for ours. What good is a laser rifle with heat tracking technology and photon torpedo launcher against a military issue AK-47? Human soldiers would kick their asses and then punch them in their inhuman faces while delivering witty one-liners. Because when half the human race is dead or dying is the best time for a little humor.

In the end the remnants of the human race would put aside their differences and rally together. We’d discover a flaw, a Death Star-like weakness in their motherships design and exploit it. BOOM! We win! Cue inspirational speech from surviving person of importance and role credits because ‑‑ human ego and arrogance.

In reality, it would probably go down a little something like this:

Meteor are sent to mark and gauge the terrain. An electronic pulse is sent from our galaxy’s edge and the grid goes down. Moments later a fleet of alien ships appear on the horizon, undetected but by those who witness. Very few will have time to take action or find effective shelter. A second pulse emits, scrambling human brain waves, turning 95% of earth’s human populace into mindless vegetables. Seconds later the ships move methodically in unison into the lower atmosphere. Toxic gas is emitted as they sweep the country sides, unharmful to plant and animal life but deadly to people. 98% of the human race is left dead and dying. The few remaining, scattered survivors crawl from their refuge in time to see purging ships meticulously remove all traces of pollutants, radiation and toxins from the sea, land and air. As they depart they reseal the damaged ozone layer. This world has been cleansed, the infestation has been curbed and the life-sustaining planet in this solar system has been saved.

Perhaps the human race should put its arrogant ego aside, look around and take note of its insignificance in the grand scheme of things. Whether we’re an alien experiment gone awry, a natural phenomenon, or the result of divine intervention, we are the caretakers of this planet or at least the inhabitants. We need the earth to survive; it would get along quite well (and probably better) without us. We need to acknowledge this and take better care of our world… before someone else realizes we’re incapable of this responsibility. 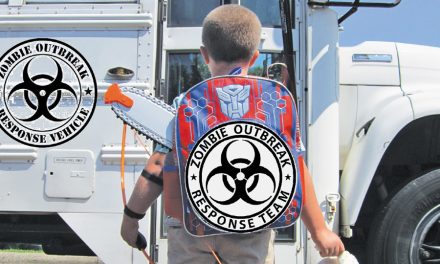