Phoenix (AP) – An Arizona prospector realizes he’s lucky to be alive after surviving nearly three days at the bottom of an old abandoned gold mine shaft in the Arizona desert and staring down rattlesnakes.

John Waddell, 60, broke his left leg and ankle when the rigging he used to lower himself into the 100-foot (30-meter) shaft about 90 miles (140 kilometers) northwest of Phoenix broke on Oct. 15.

He free-fell to the rocky bottom and saw that his left leg “was flopped up and my ankle was going the other way,’’ according to Waddell.

He had a cellphone but no service. A flashlight that didn’t provide light for very long. And no food or water.

Waddell said he killed three diamondback rattlesnakes with a stick before they could strike – including two the first day – and then hung on before he was finally rescued Oct. 17 when a friend drove to the mine and heard his cries for help.

“If I stayed down there, I knew I was going to die,’’ Waddell said Sunday at a news conference at a Phoenix hospital where he’s recovering from his injuries. “I was scared. Just about all hope was gone.’’

Waddell owns the land where the shaft is located, part of his 100-acre (40-hectare) mining claim in Arizona’s Sonoran Desert.

He likes to look in the abandoned mines for a few bits of gold to sell and knew this particular one had some in the rocks.

When his rigging broke and he hit the bottom of the 8-foot-wide shaft, Waddell said he relied in some medical know-how and found a stick and set his broken leg and ankle.

But he soon had to take out the stick and beat the foot-long rattler before it could bite him, then later felt a 2-foot-long snake under his arm.

Waddell said he threw that second snake against the wall of the mine shaft and also beat it to death with the same stick.

“Your survival mode kicks in. It was either me or them,’’ Waddell said of the rattlesnakes. “It’s a will to live.’’

He killed a third snake on Wednesday, a 3-footer.

By then, Waddell said he was starting to hallucinate. He popped blisters to get water into his mouth and sucked moisture out of his shirt so he keep yelling and screaming for help.

Waddell said he thought he heard a truck drive up to the mine and someone calling out his first name.

It was his friend Terry Schrader who knew Waddell was going to attempt a descent into the mine and had agreed he would go look for Waddell if he didn’t hear from him soon.

“I broke down. I knew I was going to get out of there,’’ Waddell said. “I was just so thankful.’’

It took about three hours for rescue crews to lift Waddell to safety and then to a hospital for treatment.

Dr. Cliff Jones, an orthopedic surgeon at Banner-University Medical Center who set Waddell’s broken femur and ankle, said the miner is lucky he didn’t die of internal bleeding or a blood clot, dehydration or shock.

His left leg still in a cast, Waddell has 6 to 8 weeks of recovery time.

Despite the harrowing mishap, he still intends to explore more mines.

Waddell resting after his rescue 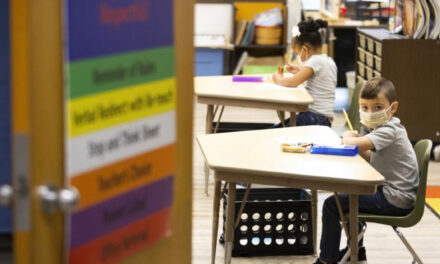 Pandemic Prompts Changes In How Future Teachers Are Trained