The NFL and its players are still at odds over the player’s right to kneel or stand for the national anthem. The controversy clearly hurt the game last season in terms of public relations. One off season later, and the league  is still struggling with the issue. The Dallas Cowboys and their owner, Jerry Jones, made news last week when Jones stated that his players will all stand for the national anthem or they would be released by the team. The team is his team and I am all for him to pick and choose who is on his team. What I am not for is the hypocrisy at play here. When Jones announced his anthem policy, he made sure he spoke of how important of an issue the flag and anthem are to him. 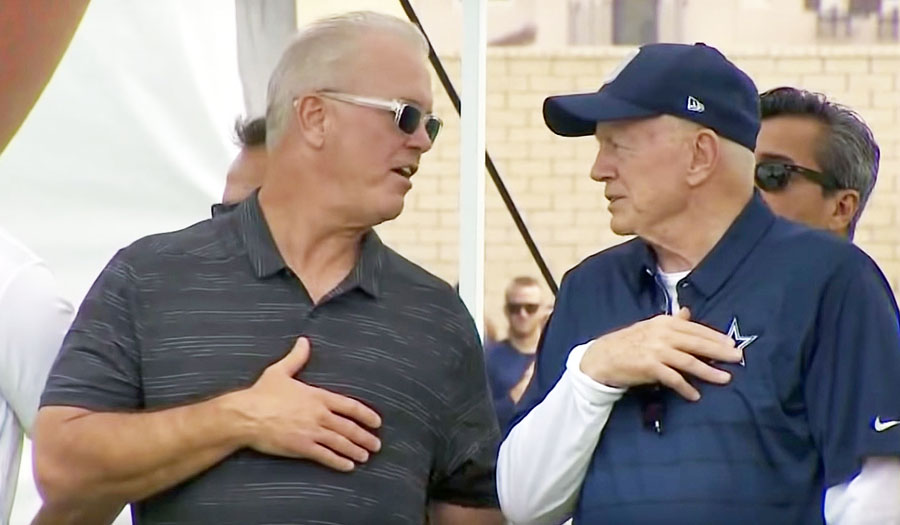 I would love to believe him, but when the national anthem was played before the start of the Cowboy’s practice last Saturday, he left his cap on. And when he was told about the mistake he was making, he still left his cap on. Another example of those who make the rules apparently do not have to follow them.

Jones, r, pledging his allegiance by talking & keeping his hat on

And then there is this. I find it appalling that a player can beat up a woman and play for the Dallas Cowboys. A player can use illegal drugs time and time again and still play, but you take a knee to protest your belief that there is racial injustice in America, you’ve crossed a line that Jones will not put up with.

Yes, those who follow the NFL are well aware of Jones and the Cowboys signing and keeping players who have history of domestic violence (Greg Hardy) and cocaine use (Michael Irvin) to name a few. You can break the law and play for Dallas but you can’t take a knee. Something tells me the Cowboys would not release quarterback Dak Prescott if he kneeled during the national anthem.

Is Hader A Hater?

Josh Hader made the National League All Star team last month. However, that is not what put the Milwaukee Brewers pitcher in headlines across the nation. Hader made the news due to a revelation that his Twitter account was full of racist and offensive statements, all of it posted when he was a teenager in 2011 and 2012.

Hader took some heat during the All Star break. The story gained even more traction when he returned to Milwaukee to pitch. This time, the national media questioned the fans of the Brewers who gave Hader a standing ovation upon his entering the game. I will admit that this crowd’s reaction likely meant different things to different people. And I will also disclose that Hader spent the previous week apologizing for the old tweets. I truly hope that the extended ovation centered around Hader being forgiven instead of supporting beliefs that Hader still may or may not believe in. And it probably was.

Still, having read the offensive comments, I would find it difficult to stand and cheer for the author of the statements. It just looked and sounded awkward to me.

I realize that Hader was likely just an ignorant teenager when he made the statements. And that he is now seeking forgiveness. And in time, he will receive it from many.  But it seems to me that an expression of forgiveness towards a man who has apologized for appearing sincere while expressing homophobia and racism as an 18-year-old is not a rousing standing ovation. I am much more for accepting the apology and moving on while letting time tell us if he is contrite and has changed his views. To me, a standing ovation is reserved for someone who has done good, not just someone who has apologized for being actively bad.

By the way, Hader pitched well against the Dodgers after receiving the ovation. He worked around a two-out double in the seventh and then striking out the side in the eighth, to give the Brewers two innings of scoreless relief en route to 4-2 victory.

Again, it appears that nothing is more important than winning games.