Jimmy Carter: Rock and Roll President (2020) Filmmaker Mary Wharton has put together a pretty impressive roster of talent, Bob Dylan, Willie Nelson, Jimmy Buffet and even the former president himself, for this documentary which chronicles the relationship between the 39th president and the Rock and Roll culture that helped get him elected. There are many excellent stories related by the film’s interview subjects in the film and lots of never before seen archive footage as well. Highly recommended.

I Am Woman (2019) Tilda Cobham-Hervey does an impressive job with her portrayal of 70s pop singer and feminist icon, Helen Reddy, in this musical biopic directed by Unjoo Moon. The film is much superior to such biopics as Bohemian Rhapsody in that it gets the technical details right as it charts the singer’s rise from the mid 60s to her eventual fall and resurgence in the late 80s. Well made and worth a look for pop music fans.

I’m Thinking of Ending Things (2020) The latest from revered screenwriter and filmmaker, Charlie Kaufman (Being John Malkovich), stars Jessie Buckley as a woman taking stock of her life on a trip to her boyfriend’s parents. Fans of Kaufman’s style of writing will likely enjoy this road trip.

Mighty Oak (2020) A young girl (Janel Parrish) becomes enamored with a guitar prodigy, giving her life a new purpose in this comedy.

The Comic (1985) An aspiring comic is prepared to kill to advance his career in this cult horror classic directed by Richard Driscoll. Extras include new talent interviews. 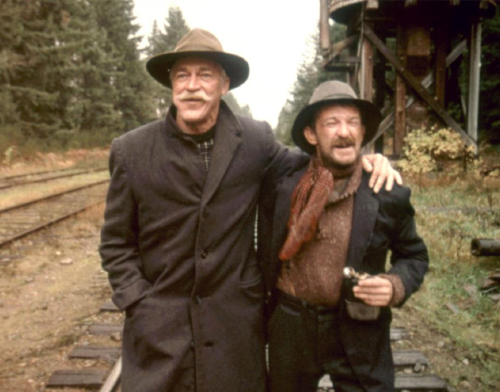 Richard Farnsworth and Wayne Robson in The Grey Fox

Caro Diario (1993) Italian filmmaker, Nanni Moretti’s well reviewed comedy is structured around the filmmaker reflecting on several entries from his ‘diary.’ Extras include deleted scene, making of featurette and an essay booklet.

A Tramway in Jerusalem (2020) Filmmaker Amos Gitai relates the tales of several passengers on the Jerusalem Trail Line in this Israel/French co-production that Jewish Week calls ‘Graceful and charming.’ Extras include a bonus short film.

Filmmaker Jules Dassin directed the two classic crime films, Naked City (1948) and Brute Force (1947), both of which are being issued with a copious amount of extras in separate editions.

The Grey Fox (1982) Former stunt man turned actor, Richard Farnsworth made an indelible impression as Bill Miner, a man trying to adjust to life in the mid 1930s after having been imprisoned for the previous 33 years. This previously hard to find gem from director Phillip Borsos has been meticulously restored and contains new extras.