Those Who Wish Me Dead (2021) Angelina Jolie stars in this action thriller about a firefighter protecting a young boy targeted by assassins. 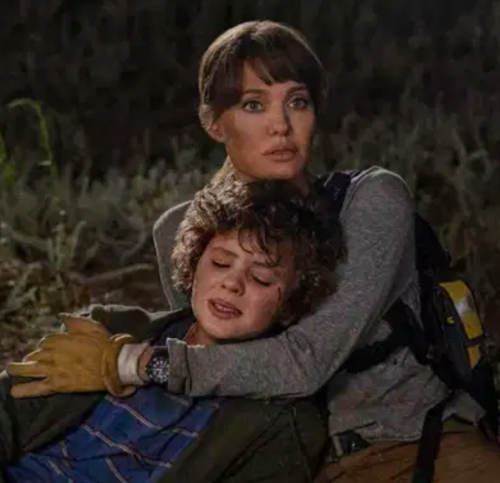 Angelina Jolie and Finn Little in Those Who Wish Me Dead

Man With a Camera (1958-60) Charles Bronson first came to prominence in this ABC TV series about a combat photographer turned freelancer working in NYC and solving crimes. All 29 episodes are included.

Severin: Santa Sangre (1989) The bond between a between a traumatized boy and his armless mother forms the plot of this celebrated film from acclaimed filmmaker Alejandro Jodorowsky making its 4K debut in a four disc set with over eight hours of extras. The film’s soundtrack is also included on a bonus disc.

Eyes of a Stranger (1981) A TV newswoman (Lauren Tewes) and her physically impaired sister (Jennifer Jason Leigh) are terrorized by a sadistic killer in this chiller. Extras include talent interviews and trailer.

He Knows You’re Alone (1980) Tom Hanks made his film debut in this horror tale of a bride who enlists her ex boyfriend to help rid her of a crazed slasher who has the woman in his sights. Extras include talent interviews and commentary.

Wildcats (1986) Goldie Hawn is tasked with coaching a losing football team in this comedy from Michael Ritchie. Extras include interview and trailer.

The Snoopy Four Movie Collection (1969-80) All four of the Peanuts theatrical films are contained in this four disc set. No Extras.

John Wayne 14-Movie Collection (1953-76) (DVD Only) is a new set containing practically all of The Duke’s output at Paramount. Films included are The High and the Mighty, Sons of Katie Elder, Rio Lobo and True Grit.

Beverly Hills 90210: The Ultimate Collection (1990-2000, 2019) Both the original series and its 2019 reboot are bound together in this 74 disc set which also includes behind the scenes features, interviews, gag reel and promos. A must for those looking for a blast of 90s nostalgia.

It Happened Tomorrow (1944) A reporter (Dick Powell) finds himself able to get tomorrow’s news today in this comedy from Rene Clair. Extras include a trailer.

Mr. Blandings Builds His Dream House (1948) Cary Grant and Myrna Loy find themselves in over their head when attempting to put together the home of their dreams in this comedy. Later remade as The Money Pit. Extras include a cartoon and radio broadcasts.

Drunken Master II (1994) Jackie Chan returns as the title character in this action comedy sequel. This time he’s attempting to put a stop to the smuggling of national artifacts. Includes the film’s original subtitles.

The Private Lives of Elizabeth and Essex (1939) Bette Davis and Errol Flynn star in this tale of the love affair of Elizabeth 1 and the Earl of Essex lovingly filmed in Technicolor. Extras include a cartoon and newsreel.

Escape From Fort Bravo (1953) William Holden attempts the escape of the film’s title while being pursued by John Forsythe in John Sturges Civil War actioner. No Extras.

Last Days (2019) is the Award Winning tale from Nigeria of a single mom desperately attempting to make ends meet when her health takes a downward turn.