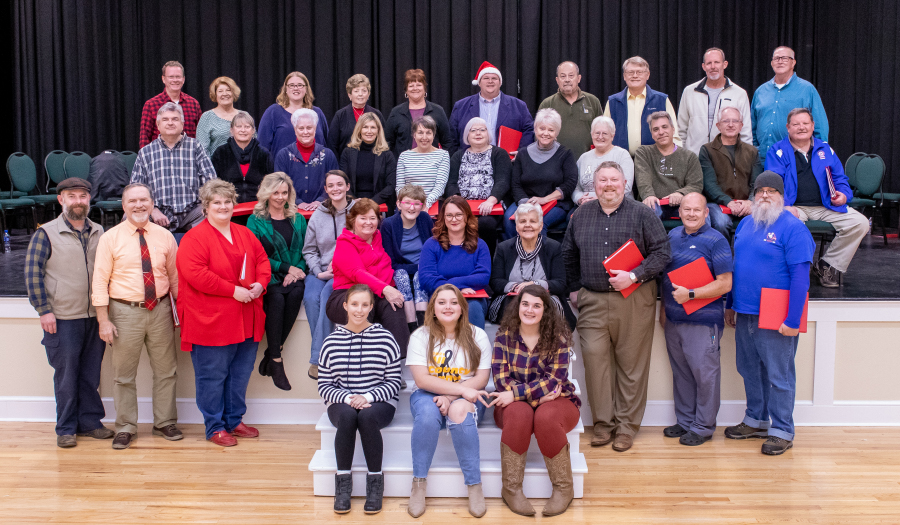 Hudson, NC – A little over a decade ago, Caldwell County theatre and music director, Keith Smith, came up with a holiday seasonal artistic idea. Smith says, “I was an only child, and like all other children, anxiously anticipated Christmas each year. At home, we had this huge mahogany cabinet that contained a record player; every night when it was bedtime, my parents and I would put about 5 long playing albums on the stereo that would drop down one by one as we drifted off into dreamland. We only did this during the holiday season. So I acquired a taste for Perry Como, Bing Crosby, Andy Williams, Frank Sinatra, Nat King Cole, Dean Martin, Johnny Mathis, Fred Waring and the Pennsylvanians and others. I began to associate them with the magic of the season. Add the big Christmas light bulbs, the revolving tree wheel of color, and the cream-colored white plastic candles with blue bulbs in the windows and it created a mosaic that I always fondly recalled. Looking back, I realized how much I missed that warm nostalgia. So beginning in 2010, I assembled a large, talented choir and we sang favorite songs of the season, both sacred and secular, to set the holiday, festive mood. Over the years, many people have told me that this Home for Christmas concert kicks off their Christmas season!”

The concert was presented annually at the HUB in Hudson from 2010 until 2017. For a variety of reasons, including Covid in 2020, this is the first year the concert will be presented since 2017. Smith has assembled a 52 voice choir. Refreshments, snacks and Wassail will be served. The concert will pay tribute and honor to Caldwell County’s own native son, Gregory Knight. Knight has been battling cancer and will perform for the first time in the last 2 years. There will be a special presentation of Clement Clark Moore’s famous poem, “A Visit from St Nicholas,” better known as “Twas the Night Before Christmas.” The choir will regale the audience with popular Christmas music. There will be an ugly sweater contest each night with the winner receiving a $100 prize.

The Home for Christmas concert will be presented Friday and Saturday, December 10th and 11th at 7:30 PM at the HUB Station, 145 Cedar Valley Road in Hudson. Ticket are $20 and may be obtained in one of two ways; go by Hudson Town Hall, (not the HUB), or call 322-3169; leave a message and your call will be returned. Seating is general admission. For further information, call 828-322-3169.