One of the worst film experiences I had in 2017 came early in the calendar year in the form of M. Night Shyamalan’s film, Split. At the time the film seemed like a big buildup to nothing and I was so angered by the experience that I was literally shaking after the screening as I attempted to articulate to the studio rep how much I loathed the experience. To make matters worse, there was a tease at the end of the film indicating that it was really just a lame excuse to introduce a character that would play a larger part in Shymalan’s long rumored sequel to his earlier film, Unbreakable. After being promoted as a stand alone film I felt this was more than a mere insult to those willing donate a couple hours of their time for Shyamalan’s folly.

Two years on that long gestating sequel to Unbreakable has finally arrived in the form of Shyamalan’s latest film entitled Glass. The biggest surprise is that now having seen where the filmmaker was going with all of this I’m willing to be a bit more forgiving for what I perceived to be his previous cinematic transgression. I won’t go so far as to say that Split is a good film but at least it’s a little more tolerable in hindsight.

The 2000 film Unbreakable told the story of David Dunn (Bruce Willis), the lone survivor of a horrendous train wreck who attempts to come to terms with the reasons why he lived when others didn’t. Dunn eventually finds his life entangled with a man named Elijah Price (Samuel L. Jackson), with a disease that makes his bones extremely brittle, who won’t stop hounding Dunn for answers as to why he survived. The film ended with a twist that landed Price in a mental institution.

In Glass, James McAvoy returns as the man of many identities, Kevin Wendell Crumb, from the film Split. He, along with the aforementioned Dunn, wind up in the same psychiatric hospital where Price resides and the stage is set for the trio to butt heads down the road. Of course, they eventually do just that.

The first half hour of Glass moves along at a pretty good clip. Unfortunately, when the film begins to focus on the trio’s psychiatric treatment during the mid section things get really bogged down. Trimming at least a good ten minutes out of this section would have accomplished much and lost nothing.

Thankfully, things pick up for a pretty rousing finale wherein Shyamalan reveals not just one but several of his patented twists. There are a few surprises that I didn’t see coming, and there are many messages about finding one’s destiny thrown once again into the proceedings. Whether you’re willing to swallow Shyamalan’s plot turns or not will dictate your ultimate tolerance for Glass. For myself, I was just glad I was not violently shaking in anger when I exited the theater.

The latest version of the oft-told tale of Mary Stuart, the sixteen-year old Queen of France who found herself a widow just two years later, is a technically sound affair that’s awfully nice to look at and also features some great acting to boot. Still, I couldn’t help but feel a beating heart underneath all of the splendid costumes and top notch production values. It reminded me of a quote from author Stephen King in regards to Stanley Kubrick’s film version of his novel The Shining.  King said something to the effect that the Kubrick film resembled a nice Cadillac with no engine under the hood. That’s sort of the impression that I received from this latest version of Mary Queen of Scots, a tale that was much better told in its 1971 incarnation from

The difference in this version of Mary Queen of Scots can be found in its sexual explicitness. The characters in the film are depicted in the throes of passion in any number of ways throughout but I thought that it enhanced rather than detracted from the proceedings. It’s all used in service to the story in way that I found to be refreshing. That’s one of the pluses to be found in this take on the well-known story.

Ronan and Robbie in ‘Scots’

Saoirse Ronan turns in another one of her great performances in the title role. The time is the mid 1500s. Mary, having recently been widowed, is thought to be the heir to the British throne. Religious differences, the cause for so much unrest and bloodshed during that time, put an end to that idea and leave Mary and cousin Elizabeth I (Margot Robbie, also quite good) to battle each other for the throne.

Mary is a Catholic and only Protestants are thought to be good enough to rule the country of England. Elizabeth plots and schemes to make sure that no Catholic usurps her position while Mary ponders who might be her next husband, sometimes making really bad choices in the process.

The film has everything one would expect to find in a costume drama but it feels like the writers are constantly attempting to hit a series of bullet points as opposed to crafting real life characters with whom we can relate. There’s much to admire but never quite enough to make you feel these people are anything but the creations of a screenwriter’s imagination.

Mary Queen of Scots plays only through 1/17 in Hickory, but is playing in Charlotte.
Glass opens in Hickory and around the area on Friday.

The total number of films that I managed to see in 2018, exceeding my 2017 list by roughly 30 titles, clocked in at a final number of 381. Of those films, roughly one quarter of them were films released theatrically during the year. 2018 was interesting to note in that I failed to give any single film a perfect score of four stars. Don’t take that as a sign that there was any shortage of good films to be seen, however.

The problem is that the marketplace is becoming so increasingly cluttered that one has to pay dynamic and vigorous attention to keep up with it all and find the good stuff, making it a constant challenge for my colleagues and I. As the following list suggests there were many great films to be seen and embraced throughout the year.  What follows are the top ten theatrically released films that made the biggest impression on me during the calendar year of 2018.

10. Jane Fonda in Five Acts-This film made its debut on HBO at the end of summer and was seen in theaters in some of the bigger markets. It’s great when a documentary upends expectations by revealing new things about a subject you thought you already knew pretty well and this one succeeded handsomely on that level. It’s an incredibly moving and revealing portrait of Jane Fonda that also works as great cinematic storytelling.

9. Vice-Filmmaker Adam McKay’s revelatory portrait of former Vice President Dick Cheney features a terrific and fascinating performance by Christian Bale but that’s not the only reason to see this one. It’s a biopic that’s, at turns, both hilarious and frightening in its attempts to peel away the layers of a man generally regarded as a mystery.

8. Green Book-This tale of the relationship between an African American Jazz musician and his driver, set against the backdrop of the southeastern US of the 1950s, won’t get any points for subtlety. The winning performances of Mahirshala Ali and Viggo Mortensen in the respective lead roles, however, more than compensate for any shortcomings in the delivery of the film’s message.

7. A Star is Born-Who would have thought that a fourth version of this well worn tale of the struggles of a show business couple would still pack such a punch? A lot of the credit must be given to the great chemistry of the lead performances by Bradley Cooper and Lady Gaga, the excellent songs and the sure fire direction of first time helmer Cooper.

6. Eighth Grade-Comedian Bo Burnham made quite a mark with his directorial debut chronicling the awkwardness of being a teen in our current day and age. The lead performance by Elsie Fisher and Burnham’s sharp observations make this a must see.

5. Blackkklansman-Spike Lee came roaring back as a filmmaker with this true-life tale of an African American police officer who infiltrated the KKK in early 1970s Colorado. Lee proves once again how potent he is with a film that’s funny, angry and sobering. It also, surprisingly, contains the best use of a pop song (Too Late to Turn Back Now) that I’ve seen in any movie this year.

4. The Death of Stalin-Filmmaker Armando Ianucci accomplished something very unique by taking the reality-based story of the film’s title and turning it into an uproarious black comedy. This proves yet again in such a brilliant fashion the old adage that the truth is stranger than fiction.

3. If Beale Street Could Talk-I wasn’t a fan of Barry Jenkins’ Oscar darling from two years ago, Moonlight, so I wasn’t expecting much from his follow up film. I could not have been more surprised at how deeply I responded emotionally to this tale of a couple ripped apart when the male counterpart is falsely accused of a rape he didn’t commit. Beautifully scored and photographed and emotionally resonant.

2. The Hate U Give-If any movie in 2018 deserved accolades that it never received this is the one. An emotionally jarring portrait of a teen torn between two different compartments in her life who must make a choice when she becomes the only witness to her childhood friend’s murder at the hands of the police. The fact that the film’s screenwriter, Audrey Wells, died the day before the film made its debut after years spent trying to get it made, makes it all the more deserving of attention.

1. First Reformed-Paul Schrader, the writer of Taxi Driver and Raging Bull, had been pretty much written off for years but came back with a vengeance with what turned out to be my favorite film of the year, a thought provoking tale of an upstate NY minister suffering a crisis of faith. Ethan Hawke was never better than in his lead performance.

Jane Fonda at the premiere
Ethan Hawk in First Reformed 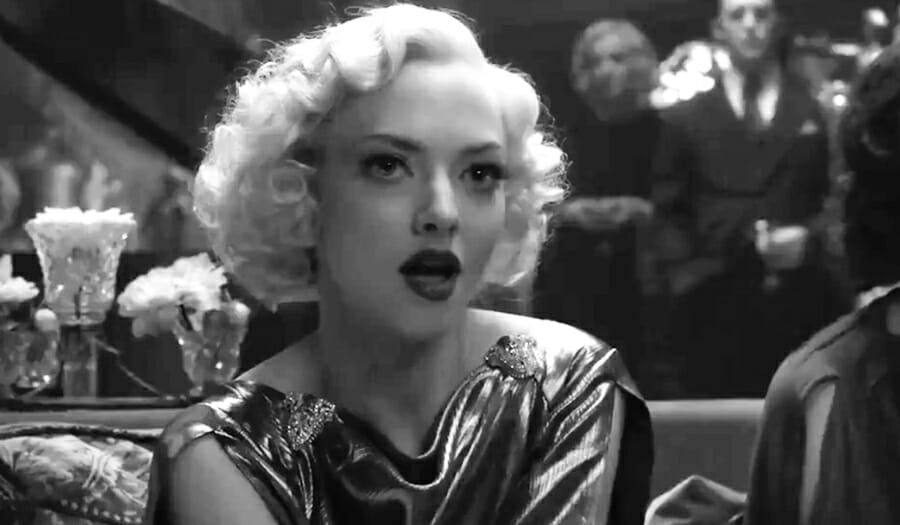