What happens when one is informed of a loved one’s death and goes through the various stages of grief only to later learn that the loved one in question is actually very much alive? How does one handle riding along on a roller coaster of emotions that such a scenario might bring forth? This is one of the more intriguing issues brought to the forefront in the film Foxtrot, a film that rises and falls on its topical subject matter. Some of the themes at play in Foxtrot might not be exactly what one would call unchartered territory but it’s just interesting enough to hold one’s attention in spite of a feeling of having seen this done before in films of a similar nature.

The subject of misplaced grief is only thing that’s touched upon in Foxtrot. There are others and most of them, as previously mentioned, are of a topical nature and steeped in the subject matter of war. It’s obvious that director Samuel Maoz, whose previous film from 2009, Lebanon, is one of the must see war pictures of the last fifteen years, has definitive feelings about war and the horrors found therein. Foxtrot is a comparable companion piece to his earlier film even if it does not quite come as close to hitting the heights that Lebanon managed to do.

The film opens with something we’ve seen depicted in many movies throughout the decades. The soldier showing up at the door of affluent architect, Michael Feldman and his wife, Dafna, and promptly informing the couple of the death of their son, Jonathan.  It’s quickly established that Michael has dreadful memories of his own experiences during an earlier war and the devastating news of his son’s death is certain to only make matters worse for the architect. Add to the fact that Michael and Dafna’s marriage is already on shaky ground and it becomes relatively obvious that this couple’s relationship is, at the very least, not headed in a good direction.

Michael and Dafna are later informed, after having done their fair share of grieving, that their son was, in fact, not killed. Will this save their marriage or will they continue on their downward spiral. The film doesn’t answer this immediately but instead focuses on Jonathan’s military experiences before returning to focus on the Feldmans before the film’s end.

Foxtrot does have a sense of humor at play that serves it well, but the film works best when displaying a cruel sense of irony active in the world. Rest assured that Moaz has given us some interesting things to chew on even if he doesn’t outshine his past cinematic triumph. 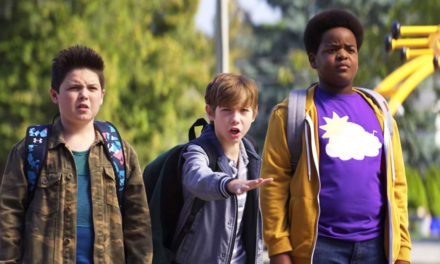