Sometimes I forget why movies matter and then one comes along that reminds me how much fun it is to be a part of the communal experience that only seeing a movie in a packed theater full of total strangers can provide. The thrills of going to the movies came into clear focus the other night at the press screening for director Fede Alvarez’s latest thrill ride, Don’t Breathe. The audience gasped, screamed and even laughed at times as the film revealed itself. Suddenly I was reminded that this is the kind of thing that can’t be replicated in the comforts of one’s home and why going to the movies is still such a unique experience. The movie was fun but I’m not sure how enjoyable it would have been had I watched the film in my bed on a tablet or a small television monitor as many folks are prone to do these days. Suffice it to say that this is the kind of thing that makes going to the movies still a lot of fun.

Don’t Breathe is the first film directed by Alvarez since his 2013 remake of The Evil Dead. I didn’t much care for that film even though I’m quite a fan of the original trilogy of Evil Dead films, directed with such flair and gusto by the great Sam Raimi. Alvarez’s take on Evil Dead was too larded up with over the top gore for my taste and lacked the suspense for which the original series of films was known. Raimi produced that film and returns to producing duties with Don’t Breathe and his handprints are all over this one but in a positive way.

The film’s plot is deceptively simple in the same way that Raimi’s Evil Dead films were constructed from low-brow screenwriting elements. All the typical horror movie tropes are on display in the film and yet they somehow work, right down to the menacing dog that shows up just at the right moments.

The story is set in the burned out ghettos of Detroit as three late teen/twentysomethings who yearn for a new life are enticed to rob homes in order to get their ticket out of town and to a new existence. Their latest victim is a blind man (Stephen Lang, villainous in the same way he was in Avatar) who has come into some money since the death of his daughter in a car accident. They assume it will be an easy score but little do they know. The blind man proves to be more of a menace than any of the characters could have ever predicted and the film eventually becomes a reverse sort of cat and mouse.

The film is skillfully directed and full of suspenseful sequences. Plus, it gives new examples of creative ways in which to use a turkey baster. Stick around for the third act and you’ll see what I mean. You have been warned. 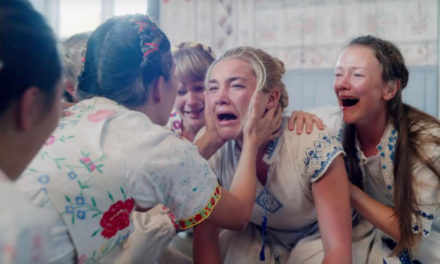