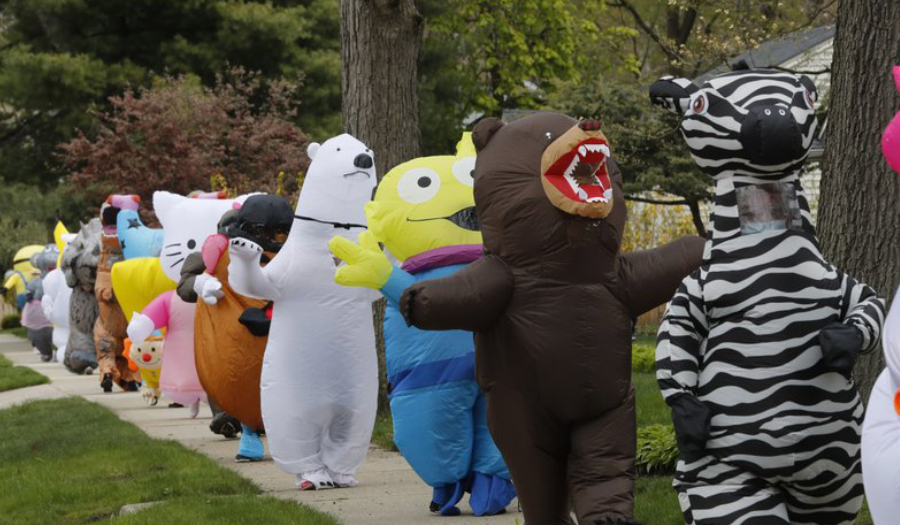 Ferndale, MI (AP) — Sarah Ignash spends her days looking after dogs in normal times. With her business temporarily shuttered because of the coronavirus, though, she’s taken to walks on the wild side through her Detroit suburb with dancing bears, bipedal zebras and the like.

Ignash, whose business in nearby Roseville specializes in boarding, grooming and day care for dogs, is one of the roughly two dozen members of the Ferndale T-Rex Walking Club who have been donning inflatable costumes for feel-good jaunts during these stressful times.

“It’s so much fun. Nobody can really see, (because) I have my mask on. And when I walk, I’m just smiling from ear to ear,” the 42-year-old Ignash said before donning her pink unicorn get-up and leading Monday’s impromptu parade.

It was the club’s seventh walk since it formed in March. The members’ full-body inflatable costumes run the gamut from dancing hippos, sharks and bears to a cheerful Pikachu, Stay Puft Marshmallow Man and Mr. Potato Head. And, of course, there’s a T-Rex.

They trek single-file along sidewalks to thematically appropriate tunes such as the Bangles’ “Walk Like an Egyptian,” and “Walk the Dinosaur” by Was (Not Was).

“The purpose of the group is to just do something a little bit out of the ordinary,” said Ignash, the group’s leader and founding member.

Ohio Woman ‘Prisoner’ In Own Home Due To Deer Attacks