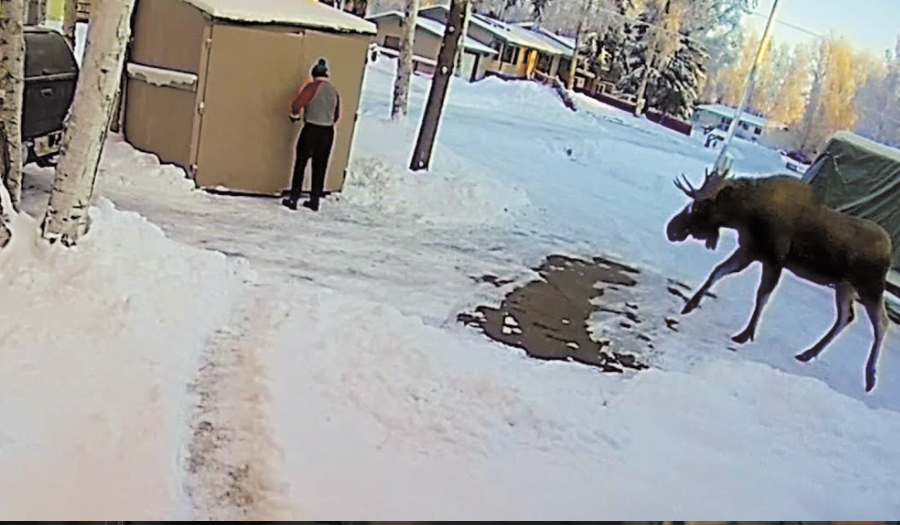 Anchorage, AK (AP) – An Alaska man carrying garbage to his shed had to take cover inside when a curious bull moose decided to join him.

A Ring home security camera captured Curtis Phelps trapped inside the shed while the moose, with just one antler, tried to push his way inside. The moose eventually moved on and Phelps escaped after calling his wife, Amy, with his cellphone.

The Phelps live in south Anchorage, where moose are regular visitors. Two years ago, a cow gave birth to a calf in their back yard. Since then, a young moose, possibly the same calf, has regularly returned. The home security camera in December 2018 recorded the moose on the Phelps’ front porch eating a Christmas wreath that the family had hung.

The latest encounter occurred at a bout 11 a.m. Jan. 11. The family was having a lazy Saturday, Amy Phelps said. She had placed a garbage sack on the front porch and Curtis decided to take it to their locked shed.

“He said he walked out and he looked both ways as we always do and nothing was there,” she said. “All he wore was his hat. He had his cellphone, though.”

Curtis unlocked the shed, deposited the garbage sack, stepped outside and spotted the moose moving his way — and picking up its pace. He ducked inside and the moose walked up to the door and gently pushed it.

“He could see him pushing,” she said. “It’s cracked a little bit.”

Curtis heard footsteps along the side of the building and suspected the moose had moved. He called his wife to make sure. She ignored the call.

“I thought he was just accidentally calling me,” she said. “I had no clue that the poor thing was stuck in there.”

Curtis then called his 13-year-old daughter inside the house. She wanted to keep sleeping and ignored the call, Amy Phelps said.

On his third call to his wife, she picked up. She heard Curtis yelling and looked outside but could not see him.

She finally figured out he was in the shed. She told him the moose had crossed the street and he could come out, she said.

Moose generally are not aggressive, according to the Alaska Department of Fish and Game, but if irritated or threatened, can deliver deadly blows by kicking, usually with their front legs. The kicks can kill a wolf and fend off a bear. More people in Alaska are injured by moose than bears, according to the department.

Amy Phelps said she’s not sure what the moose was thinking as it walked toward her husband.

“This one seemed kind of aggressive,” she said. “I don’t know. You can’t trust them,” she said. 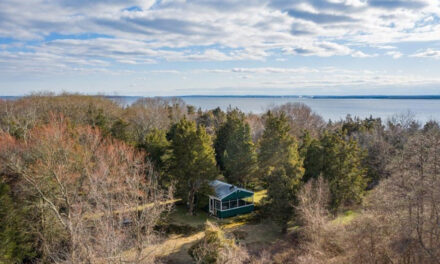 Zero Patience For Others? Small Island’s Only Home Hits Market 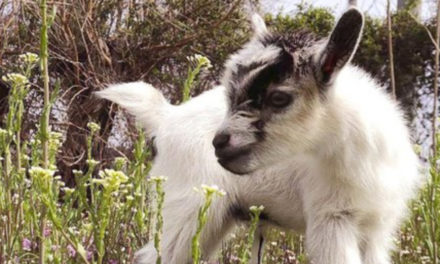 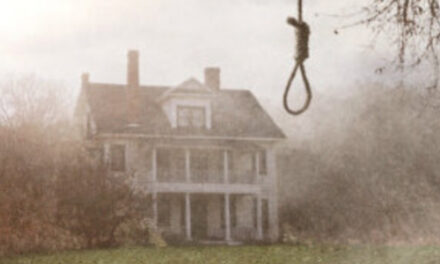 Home That Inspired The Conjuring For Sale For $1.2M