The story begins when middle-aged, upper-middle class Greg finds Sylvia, a dog (played by a human), in the park and takes a liking to her and brings her back to the empty nest he shares with his wife Kate. Tensions and jealousy rise as Greg spends more and more time with Sylvia and less time with his wife or at his job. In the HCT production of this wonderfully funny comedy Bob Smith plays Greg, Jane Lucas is Kate and Elisabeth Bokhoven has the plum role of Sylvia.

Smith’s first stage role in Hickory was another Greg, the male lead in I’ll Be Back Before Midnight. He received the 2015 Outstanding Supporting Actor award for the role of Passepartout in Around the World in 80 Days. It joins other awards he has received including Best Ensemble and the President’s Award. He has a long list of acting credits, having appeared in over a dozen plays, including two turns in The Complete Works of William Shakespeare (Abridged), The Nerd, and most recently as Leo in Chapter Two this past summer. He lives in Hickory with his wife Lynn James-Smith, also a familiar presence on the Hickory stage.

Lucas is a native of Henderson, NC and graduate of UNC Chapel Hill who relocated to Lenoir two and a half years ago when her husband Guy was chosen to be editor for the Lenoir News-Topic. Her first role at HCT was Lady Boyle, a homeless woman in the 2015 production of Superior Donuts, which was quickly followed by playing the Abbess in Incorruptible just a couple of months later. Most recently she played Maria, Florence Foster Jenkins’ maid in Glorious. She holds a PhD in English from Florida State and is an Adjunct Assistant Professor at Lenoir-Rhyne University where she teaches Critical Thinking and Writing.

Bokhoven, whose most recent roles at HCT include Rose in last fall’s The Flick and Rosemary in Outside Mullingar, and she also shared the stage with Lucas in Superior Donuts as Officer Randy Osteen. A native of the Netherlands, Bokhoven relocated to Hickory when her parents moved here in the early 1990’s. Her first role at HCT was Roo in the 1996 production of The House at Pooh Corner. She has a B.A. in Acting from Greensboro College and an MFA in Acting from the University of Nevada at Las Vegas. 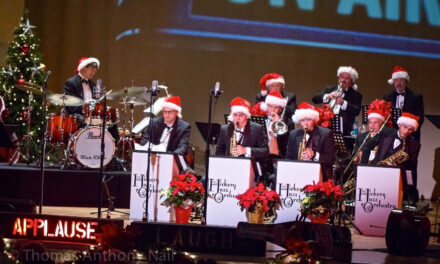