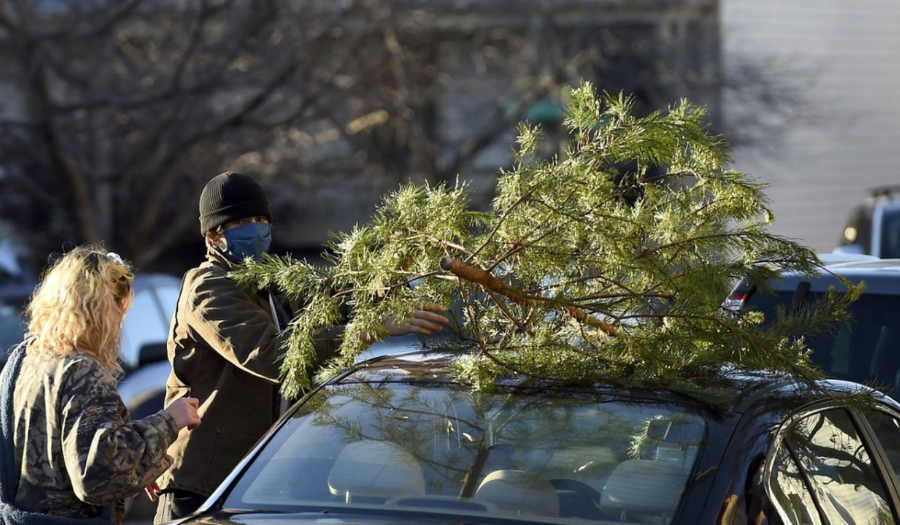 But Pichel and his customers don’t seem to mind in a year when little seems normal. His trees have been flying off a tiny neighborhood lot since he started selling them last month to raise money for a private middle school that provides scholarships for students from an impoverished area of Richmond.

Customer Camm Tyler, a 36-year-old digital consultant, looked over his uneven tree as he propped it up against a fence and prepared to carry it home.

Anna Julia Cooper Episcopal School in Richmond’s East End was started in 2009 by a group of local Episcopal parishioners and priests who wanted to help children from low-income families change the trajectory of their lives. The faith-based school is funded entirely by donors and local foundations. All of its 118 students receive full scholarships.

Pichel, a commercial animator and part-time professor at Virginia Commonwealth University, doesn’t have children or any other connection to the school. But after donating some athletic equipment to the school a few years ago, he decided he wanted to do something more this year.

He thought of the gangly Virginia pine trees that grow wild on a 66-acre (27-hectare) plot of land he owns about two hours west of Richmond. Would people want them for their Christmas trees, he wondered? His trees are not like the full-branched, perfectly shaped trees many people buy for Christmas. Instead, most are scrawny and uneven-looking.

But Pichel decided to give it a try. At first, he picked out the best-looking trees on his land, thinking they would appeal to more buyers. But then he thought of the sad-looking tree in the Charlie Brown Christmas special. His trees are taller than Charlie Brown’s but just as scraggly.

“When people want a Charlie Brown tree, they want the uniqueness and the weirdness. The ones with the fewest branches sold the quickest because they’re even more like Charlie Brown’s,” Pichel said.

Pichel cut down 70 trees, loaded them into the back of his pickup truck and started selling them right after Thanksgiving from a small grassy lot he rented for $1 from two generous owners who wanted to help. He was stunned by the response. He sold 180 trees in three weekends, raising a total of $5,554 for the school. He let people set their own prices; most paid $20 to $50 for a tree.

“Some people just stopped by and said, ‘I don’t want a tree. I just want to make a donation,’” he said.

Rei Alvarez, an illustrator and musician, said he and his wife loved the nostalgia and “Charlie Brown aesthetic” of Pichel’s trees.

“I totally grew up with it, totally,” Alvarez said.

He said buying a less-than-perfect tree fits with his desire to avoid the commercialism of Christmas and to teach his 2-year-old son to appreciate the simpler things in life.

“As an artist, I know it’s not what you have, it’s what you do with it,” he said. “You give the few branches you have a little love.”

As Alvarez picked out a tree, Mary Jane D’Arville played the theme song from “A Charlie Brown Christmas” and traditional Christmas carols on a harp on the sidewalk next to Pichel’s lot. D’Arville, who met Pichel at a local dog park, offered to provide Christmas music as soon as she heard what Pichel was doing for the school.

“Those trees, they represent that whole spirit of the Charlie Brown Christmas,” she said.

Head of School Mike Maruca said the community enthusiasm for Pichel’s trees is attributable to “people wanting to help their neighbor,” in this case, the school. He said it’s a sentiment that may be stronger this year because of the devastation caused by the coronavirus pandemic.

“Maybe all of us are feeling a little bit like a Charlie Brown Christmas tree, given 2020,” he said. “I don’t think we’re all feeling like robust, well-proportioned trees. We’re all kind of bruised.”