If you are a certain type of film goer, you know that every once in a great while a movie comes along that seems to be about and made just for you. Films like this speak to us personally as human beings. They give us insight into our own lives and force us to reevaluate and face some of the hard and ugly truths that we may be reluctant to deal with as we go through the day to day process of this thing called life. In doing so they remind us what a gift the movies can truly be and separate the folks who think movies are just entertainment from those that are smart and insightful enough to know better. Writer-director Mike White’s film, Brad’s Status, is one of those great life-altering experiences. As such, it’s also one of the best films I’ve had the pleasure of seeing this year and I’m all the richer for it.

Brad’s Status is many things, but at its heart I believe it’s an indictment of the Facebook culture in which we live. As most of us can attest the culture we live in assaults and bombards us on a daily level with the seemingly great accomplishments of our contemporaries and comrades. Those who regularly contribute to the social media platform inadvertently make us feel less worthy with their videos and pictures illuminating the seemingly exciting and fulfilled lives they seem to be leading. It’s hard not to compare one’s self to others in this environment even if deep down we know that this is a rabbit hole we shouldn’t allow ourselves to wander into. These are the universal truths that White’s film taps into in a most profoundly moving and insightful way.

Ben Stiller has never been better than he is in the role of the title character, Brad Sloane. Stiller has a sadness about him here that I don’t recall seeing before. His performance, in many ways, was a revelation to me. The character, Brad, is forty-seven and running a seemingly successful non-profit business. He has a nice home, a good marriage and an accomplished offspring. Still, somehow Brad feels a sense of melancholia and discontent when comparing his own life to the lives of his college friends. A feeling that his best years are behind him and that his current status in life is as good as it gets.

All of Brad’s growing seeds of discontent come to a head during a trip to Boston that he embarks upon with his musician son (very well embodied by Austin Abrams, who’s also a revelation) as they go forth on a tour of colleges. The character of Brad provides contrapuntal commentary to the events depicted onscreen in a most unique way that harkens to back to the use of voice-over in director Billy Wilder’s films.

Brad’s Status has quite a few great belly laughs but it’s the more serious stuff that stays with you. It made me reflect on my own choices and my own current station in life and, if you let it, it’s liable to do the same for you. It also managed to move me very deeply on more than one occasion. Through it all it never hits a false note. It’s one of the year’s best films and it deserves to be seen.

Brad’s Status is playing in Charlotte. 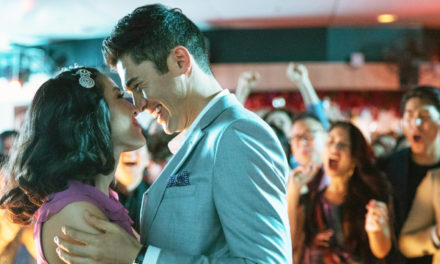