Being that the original Blair Witch Project from 1999 was one of the most successful independent films of all time, it’s a surprise that only one sequel was spawned from that first film in the intervening years. That was back in 2000 and the resulting film, Book of Shadows: Blair Witch 2, was about as shabby a film sequel as one could have imagined. Whereas the original film was one of the first in the ‘found footage’ genre, the sequel was a straight narrative film, albeit not a good one.

Seventeen years later, director Adam Wingard (You’re Next) has returned to the world of the first film by crafting another found footage entry that serves as a sequel to the original. How much you enjoy it may depend on your affection for the original Blair Witch. Since I felt that the initial film was one long buildup that only became interesting during its final ten minutes, that may explain why the latest attempt to rehash the legend of the Blair Witch onscreen didn’t quite work for me.

For one thing, the film requires a major suspension of disbelief. In the original film we were asked to believe that the entire movie was taken from video footage found in cameras after the characters disappeared, apparently as a result of the Blair Witch. That wasn’t too much of stretch. However, in this film, we are asked to believe that dozens of video cards, strewn across the woods, were found which is somewhat akin to finding a needle in a haystack. At any rate, the premise is a shaky one at best.

The film basically revolves around the emotionally scarred brother of the female character, Heather, from the first film, who’s on a quest to find his sister. If you’ve seen the film you’ll recall she’s the one who wandered around in the woods for weeks with nothing to eat but never seemed to lose a pound? Here, the brother recruits a rag tag group to help find his sister but, of course, things eventually take one bizarre turn after another as expected.

Much like the first Blair Witch film, nothing much happens here until nearly an hour in and by that time the patience of the viewer will either sustain or send one bolting for the exit door. The last twenty minutes of the film are basically one long shaky cam sequence that is sure to inflict a case of motion sickness even the strongest dose of medicine can’t prevent.

Basically, the latest Blair Witch is just one uninspired sequel that will stir fond memories in some and boredom in others. I’m in the latter camp.

Blair Witch opens Thursday, September 15, at the Carmike in Hickory. 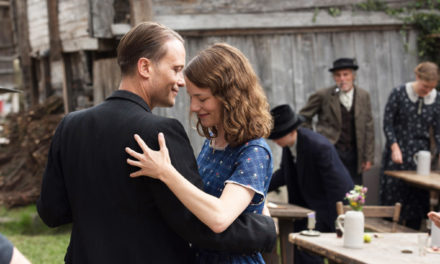