Several years ago, immediately after taking in the 1989 Oscar winner, Born on the Fourth of July, I found my daughter marveling at Tom Cruise’s revelatory performance in the film. ‘He really can act’ was the comment that sprang forth at the time and a funny thing occurred to me at that precise moment. For those of a younger generation, Cruise is most notably known for mainly two things-his tabloid antics and his penchant for playing a super hero type in more than a fair share of projects with his name attached. Thus it would only make sense that audience members who are roughly the same age as my daughter­—twentysomethings—would find his more dramatic performances from the past a bit of a surprise.

I mention the Tom Cruise from decades gone by because his latest film, American Made, is a bit of a step back towards those earlier roles which were more rooted in reality. I wouldn’t go as far as to say it’s in the same territory as his noteworthy appearance in the aforementioned Born on the Fourth of July or Rain Man but it’s definitely a turn in that direction. It’s a nice change of pace and though it isn’t perfect, it’s the type of thing the actor should consider doing more often, especially when one takes into account the recent debacle and pet project of Cruise’s, The Mummy.

American Made is based on the true story of Barry Seal. Seal was a TWA pilot who managed a nice little side business where he imported cigars during his frequent trips flying passenger to and fro. In fact, Seal was so good at his side business that he managed to get himself noticed by the CIA. One day an agent named ‘Schafer’ (Domhnall Gleeson) shows up offering Seal the job of taking aerial photos of South of the border countries under Russian influence. Soon Seal finds himself connecting with drug runners who wish to use his considerable skills to export drugs. As a result Seal eventually found himself pulling double duty, simultaneously working for the US government and also serving some of the biggest drug lords in the world of the late 1970s/early 1980s. Explaining this to his wife, Lucy (Sarah Wright) even complicated things further. Suffice it to say that before it was over, Seal found himself playing a major role in the Iran Contra scandal of the late 1980s, among other things.

American Made is a fairly interesting take on a story that most people either don’t know or have forgotten. It’s well directed by Doug Liman (the Bourne films, Mr. and Mrs. Smith) who keeps the film chugging along. Liman also gets the period details just right and makes excellent use of some of the lesser-known songs of the period. American Made may not set the world on fire in terms of storytelling but it’s more than worth a look.

This movie is playing at the AMC theaters in Hickory, and all around the area.
Cruise & Domhnall Gleeson in American Made 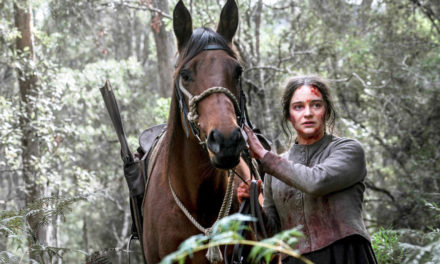