Home » News » Out of Focus » You’ve Goat To Be Kidding! Goat Eats Up Police Papers 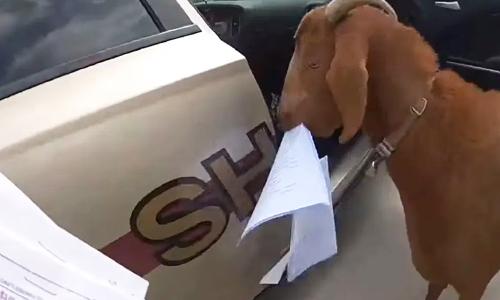 The Douglas County deputy was serving the documents near Douglasville last week when she heard something in her patrol car and was met by a goat climbing into the open driver’s side.

The animal clamored around, munched on some paperwork and knocked over a drink before managing to bump the deputy to the ground.

The sheriff’s office explained in a Facebook post on Friday that the deputy often leaves the door open on such calls in case she has to make a quick escape from aggressive dogs but she never considered having to retreat from an agitated goat.

Officials said the deputy was not physically harmed during the encounter and she managed to retrieve the soggy paperwork before the animal scampered off.