Posted by FOCUS Newspaper | September, 27, 2018 | Have Chainsaw Will Travel

The morning has passed. It’s after the afternoon. Evening is drawing to a close. Twilight teeters on the horizon…or perhaps it totters; maybe it teeter-totters with dusk? Actually twilight and dusk are basically the same thing. The only difference being the quality of the vampires. They’re glittery, eternally bored and depressed in the zone or entertaining, seductive and violent till dawn. Either /or the day is over and night is in the process of tripping and will soon fall. It is now that a pre-nighttime ritual commences; one that is echoed, in some way, shape, form or another, around the globe.

It is time; judgment has been passed by the powers that be. “Just 5 more minutes”- is the convicted’s responding plea. The irony that the true concept of time is lost on those doing the pleading is irrelevant. In truth how much difference can 5 minutes make in the grand scheme of things? In some cases it could make all the difference in the world. However in this instance it is simply a battle of wills and a method of stalling. They don’t care what happens or how long it takes as long as it delays the inevitable. Whether the superiors give in or enforce their request in five minutes or less someone is getting a bath.

Showering is the most effective form of bathing. It stands to reason that one can get far cleaner letting the filth of the day wash down the drain…as opposed to sitting in it. However, if the day hasn’t been too harsh the tub will suffice; allowing for that potential extra five minutes of conscious fun in another form. Sometimes a child is allotted privacy and left to their own devices. Does it matter how they choose to balance play versus wash? Yes, because wet doesn’t equal clean. And leaving a child unattended in any body of water is bad parenting…drowning is a silent act! So they wash and you watch, they play and you play with. Now pull the plug, watch the dirty water go down the drain while you dry them off.

There is a noticeable increase in happiness in a clean child. So now will it be rocket ships or dinosaurs? Pajamas are donned now- brush those teefies. Dentists recommend at least two minutes of uninterrupted brushing. Now go potty. It doesn’t matter if you just went…hopefully not in the tub! You will go again…right now, because no one likes to change soiled sheets at two o’clock in the a.m.

The nightly ritual concludes with a varying assortment of preset routines. Bed time stories are told. Stuffies are kissed. Pillows fluffed, covers tucked. Hugs and kisses are accompanied by “I love yous” and wishes of sweet dreams. Then…the lights go out. With this act a whole new and different ritual begins thru the eyes of a child. 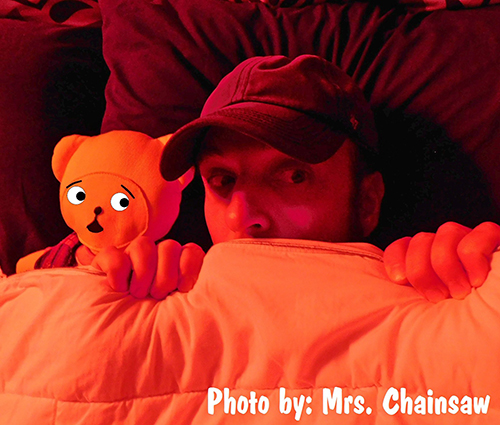 Is the bedroom door left wide open? Is there a light visible thru it letting them know the adult people are still up and on guard? Is the closet door shut tight? Because we all know monsters can’t work doorknobs but they can push them open. Does the nightlight shed adequate light under the bed to insure that things with tentacles, talons and a hunger for young flesh can’t get under there? Light scares away the monsters…so why don’t we sleep with all the lights on? Is the bed pushed close enough to the wall to prevent crack-monster access? Despite all this precaution and even if all safety parameters are in place there is always the dark and the noises therein.

The initial and immediate instincts of any child experiencing nighttime fear- find the nearest adult. But what if there is something under the bed; something that will grab their feet and drag them under, should they dare set foot off the mattress? What if there is no light in the hall? What if the sound or shadow that invokes this fear is between them and the closest big person? Well then there is only one place left to go- undercover!

In this defensive action there seems to be a flaw in a child’s logic. How can an unknown creature/entity that can rend, tear and devour you be thwarted by less than a quarter inch of compiled fabric? There are two ways to view a child’s escape attempt. The first relies on the base principle of- if I can’t see you, you can’t see me; therefore in not seeing me you cannot get me. The second is that either monsters are very stupid or that there are rules set into place regarding the abduction of children by monsters. The later seems like a logical thought for a child; what with all the other “monster rules” that are in place, i.e. can’t open doors, can’t be in the light, are scared off by grownups, don’t do crack etc.

As adults we are sympathetic to the plight of our children but behind their backs we laugh at the ridiculousness of it all. Yes, it all seems utterly, absurdly ridiculous but that’s not really why we’re laughing. That laughter is a defensive mechanism we develop as we reach adulthood. Because none of it seems too funny once the sun goes down.

Now the existence of monsters, boogeymen, spooks, spirits, aliens and things that go bump in the night is arguably questionable. The existence of fear is not. Any person who denies experiencing even an inkling of it is an outright liar or a consummate fool.

In reality how many times have we found ourselves awake, in the dark of night, because of something that is obviously not a typical home invasion? Maybe we’re exhausted to the point we can’t fully wake-up to a logical state of mind and paranoia kicks in hard. Suddenly those “house settling” sounds are louder and so much more. That dark shadow in the doorway just moved. What’s that on the floor? Is there something in here with you?

So do you be the adult? Ignore it and go back to sleep? Or do you rise defiantly using a trip to the facilities as an excuse for false bravado? Or do you stare into the darkness unmoving… watching… listening and slowly, ever so slowly, go undercover?

Next week: Hell-o-ween comes on full force. Be prepared to be scared! Muhahahaha! OMG let’s go out on that corny-assed note.

I welcome almost all questions and comments via FOCUS, or email me at wanderingchainsaw@gmail.com or you can FRIEND me on Facebook under Saw’s Brood! Hope to hear from ya, until then try and stay focused. See ya!