Posted by FOCUS Newspaper | October, 8, 2020 | Have Chainsaw Will Travel

“Darkness falls across the land; the Holiday season is close at hand. Politicians campaign to get your vote; in the backyard we’ve got a goat (seriously, ‘tis a cute baby goat person ­— see last week’s article… oops back to the rhyming rapping thing). And whosoever shall be found, without a mask when downtown. Will be asked to leave the store — you can’t shop here anymore. The foulest stench is in the air; the virus spreading everywhere. And protesters from every race are rioting all over the place. And though you fight to stay alive your troubles are quite many. For no mere mortal can resist the evil of 2020!” — Misquoted lyrics originally rapped by the original master of terror Vincent Price (1911-1993) from Michael Jackson’s Thriller.

A foreboding infectious darkness has indeed fallen across the land. As we enter into what will assuredly be a Helliday season like no other before it. The forerunner and bastard child of the seasonal trinity has no doubt already taken the brunt of the impact.

Creepy costumes and horrific décor, which were put on shelves only a week before, have already been marked down to 50% off. It seems ironic that during a time when everyone’s required to wear masks nobody wants to buy any. In addition, though not officially canceled, trick-or-treating is most likely not going to happen and probably shouldn’t. As it seems counterproductive to go door to door collecting candy whilst trying to curb a pandemic that spreads through physical contact. What you gonna do have kids stand 6 feet back and lob Lysol wipes and hand-sanitizer at them?

The same can be said for most other frightful festivities that will be affected by social distancing…which is pretty much all of them. Although a socially distanced Haunted Trail would be interesting. Yes, it seems All Hallows Eve is a bust. No tricks or treats, no haunts or horrors and no safe way to celebrate. Perhaps we don’t need Halloween as it already seems we’ve been living a nightmare for the past 7 months. A pandemic, riots in the streets and with two Killer Klowns going head to head next month, hasn’t this year been scary enough?

Ah, but despite the horrors that we’ve all experienced and shared there are still many a thing that goes bump in the night, still unseen terrors to chill the soul, still… things to fear — Welcome to HCSAWWT’S HELLOWEEN! 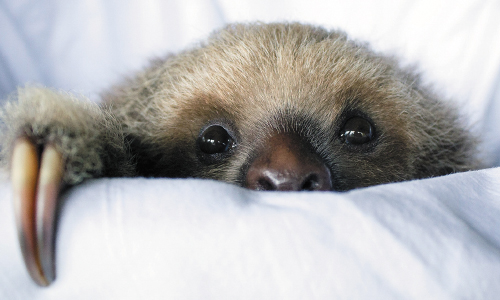 Things like baby sloths with rabies — still cute but deadly…very…slowly…deadly. Dying slowly. Getting buried alive. Being confronted by someone you buried alive. Finding a dead body. A dead body finding you. Either way, if they were naked it’s worse. Being suddenly and spontaneously nude in public. Spontaneous combustion. Forest fires…caused by people exploding? A big, pissed-off bear in a ranger’s hat armed with a shovel. Knowing you could have prevented something. Wondering if everyone else knows it was your fault. Faulty wiring on an amusement park ride. Falling to your death. Falling to your almost death. Falling down stairs…whilst carrying a spontaneously combusting rabid baby sloth…is that a bear at the bottom…waiting? Waiting at the bottom of a pool. Realizing all too late that you cannot swim. Drowning. Drowning in your own sorrow. Nobody caring. Caring too much and finding no one cares back. Being alone. Being in the company of people that hate you. Hating the company you work for. Getting stuck in a dead-end job. Getting lost on a dead-end street. A strange man stepping out of the woods and staring while you’re struggling to execute a 3-point road turn. Strangers in the woods. Being lost in the woods with strangers. Realizing you’re the strange one.

Self-realization. Realizing you’re not a good person. Bad things happening to good people…lucky you. Things that go bump in the night. Having to investigate said bumps. Confronting a stranger in the dark. Flashlights with failing batteries. Facing the unknown by strobe light. Retro themed nightclubs that everyone wants to go to but don’t dress for. Being out of style. Being out of touch. Touching moments that don’t touch you. Something…touching you in the dark. Darkness falling across the land. Realizing that after all you’ve been through…you’re back where you began.