Home » Columnists » Have Chainsaw Will Travel » The View From The Porch

Posted by FOCUS Newspaper | November, 12, 2020 | Have Chainsaw Will Travel

It has long been said that — “If one does not retain the capacity to match pace and run with the big dogs, they would surely be better off to remain in the relative safety of the porch!” The origins of this well-worn phrase are lost to time and history. Most scholars and language historians attribute it to be predominantly a rural Southern adage. This due to the metaphorical references to dogs and porches, in that most Southern country homes have a plethora of both. Proven fact: people work with what they know when turning a phrase, felines on over-heated metal housetops notwithstanding.

When used in proper context, this believed-to-be-backwoods nugget of wisdom’s meaning is quite simple to interpret. Basically, “If you can’t keep up with what others are doing, then it is best not to attempt it.” Originally this proverb was not meant to be taken in a cruel, demeaning sense by the addressee. Rather it was a colorfully worded word of warning from the addresser, with concern covered in creative and culturally relatable imagery. The content and metaphors used were most likely discerned (as most sayings from the South are), based on real life observations and events.

Most canines, hunting breeds in particular, are known to run, roam, hunt and explore as far as their domain allows or their prey will go. In this instance it would be the experienced adult dogs, the “big dogs,” that would go on the run. Whereas the little dogs, inexperienced puppies, would be expected to remain in the relatively safe domain of their basket on the porch. Were a pup to try venturing out after the “big dogs” it could be devastating. Unable to keep up it, may find itself lost. Or worse, it could fall prey to whatever the big dogs were chasing.

Based on this metaphorically easy to follow example, when this parable came into being it had the best intentions. Warning words of wisdom, presented in a witty, yet real-world wise way, anyone could discern the meaning of. It was directed mostly towards smaller children or inexperienced young adults. Encouraging them to consider the potential hazards they might encounter “running” around with older peers or adults. Sadly it was doomed to not remain as such. As it shared the same beginnings with which the road to hell is paved. 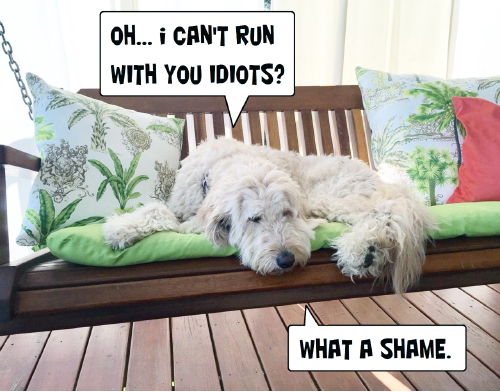 Over time this phrase’s use and meaning evolved from thoughtful sage advice and took on a more negative nature. Oft used in an arrogant, ego-fueled, “better than thou” manner by one who considers themselves a ‘big dog” (i.e. more popular, bad@$$ier, cooler than cool, and mightier than thou on your best day). With the intentions of belittling and degrading the recipient’s social status or questioning their ability to be tough, or cool enough to hang with said “big dogs.”

Now to be fair, some folks still use this phrase in a proper sense as a playful anecdote. But for others, its newer meaning comes across all too clear, “You can’t cut it! You’re not good enough! Don’t bother trying, because you’re going to fail! You don’t fit in. You can’t play with us! If you can’t hang with the big dogs stay on the porch… because we’re not even gonna give you a chance to try!”

In retort, a little metaphorical consolation for all other (not “big”) dogs — delivered from the vantage point of the porch. It’s nice up here, relaxing and quite comfortable. There’s a swing, rockers and a nice cozy blanket to stretch out and chill on. It’s dry when it rains and shady when it’s hot. Snacks, too, and porch dogs always get first dibs being closer to the people door.

Besides, who wants to hang with you anyway? Go on running around, mindlessly sniffing each other’s a**es. Drink from mosquito infested mud-holes, roll in your own feces, get hit by a car or bit by a rabid opossum. Such foolish perils are not the fate of a porch dog.

But know this: just because you are not being “hung with” does not mean the porch is never vacant. Porch dogs come, go and do as they please and unlike you big dogs have nary a worry about following the pack… or would it be a herd?