Unifour – The Board of Elections staffs in the Unifour area have been working diligently to prepare for the election while a pandemic persists. There is both a sense of calm and confidence in their offices. The directors have varying degrees of experience and are in four unique locations but their shared commitment to conducting a safe and secure election is clear. They and their staff members deserve recognition and appreciation for what they are doing to support the right for citizens to vote safely and securely.

ALEXANDER COUNTY
“The voting process works. Period.” Patrick Wike, Director
Patrick acknowledges right off how valuable it has been to him to lean on the experience and cooperative spirit of fellow directors in his neighboring counties.
While he has worked in the Alexander County Board of Elections Office in Taylorsville for seven years–three as director–this is his first general election. The staff in Taylorsville has two full and two part time employees.
He admits, “This year the challenge has been to handle the surge in absentee mail volume while also ensuring all the other essential election preparations are completed in a timely fashion.”
He has encouraged voters to see first-hand the security of the voting process by being involved as an election official during early voting and on election day. There has been an unexpected response to that need this year. More people have expressed interest in serving as poll workers for this election compared to previous elections.
Voters in Alexander County will be using disposable pencils as they vote and other high contact areas will be routinely sanitized. 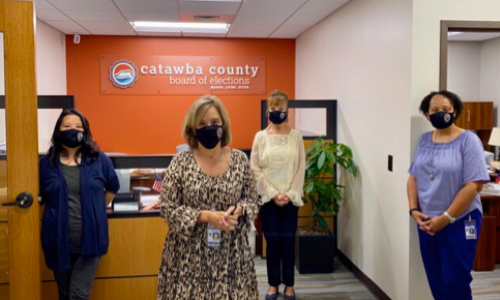 Catawba County-Amanda Duncan (center) with some of her staff in the reception area.

BURKE COUNTY
“Burke County Board of Elections workers striving for a smooth and fair election for all voters.”
Debbie Mace, Director
The above quote is posted in their Morganton Office. Debbie Mace believes that statement reflects their year-round efforts. She has been in the office 15 years, most of them as director, and has a staff of three other full time people.
Their biggest challenge has not been COVID-19 restrictions but the overwhelming volume of absentee requests.
There has been an uptick in the number of citizens registering to vote, “mostly younger folks that are registering for the first time.” The above quote is posted in their Morganton Office.
Debbie believes the introductory quote is true because of their office’s adherence to state procedure. “The office carries out all aspects of an election using the General Statutes & guidelines from the State Board of Elections to assure that each and every voter is treated equally and that their votes are securely processed from start to finish.”
She goes on to say, “Whether it’s when they register for the first time or cast a ballot, Burke citizens can rest assured that those processes are all carried out securely.”

CALDWELL COUNTY
“We have a wonderful staff and board here and we are committed to a safe, secure and fair elections in Caldwell County.”
Chad Barnes, Director
Chad Barnes has been on the Caldwell Board of Elections Staff in Lenoir where he has had experience as the Deputy Director for last 8 years. He has been director for 5 months. This is his first general election as director: however, he has benefitted from a hands-on approach to each election process. The staff consists of three full time members and a part-time position.
COVID-19 has impacted their planning for this year. It has meant that they have needed to think ahead as to how to keep both poll workers and voters safe. Just some of the items that have been added are personal protective equipment (PPE), sneeze shields and more voting booths.
He is appreciative that the NC Board of Elections was able “to procure the PPE that is needed for our county. Our County Commissioners and EMS Director have been great to work with in helping us make sure that our poll workers, staff, and voters of Caldwell County will be able to vote safely this year.”
Caldwell is using an electronic system that will be hand sanitized after.

CATAWBA COUNTY
“One of the good and unexpected outcomes of this challenging election season has been the large number of citizens willing to help with the election by volunteering. That will ensure this election is a success!”
Amanda Duncan, Director
While Amanda has been with the Board of Elections in Newton for 13 years, she still values the NC Board of Elections for its partnership and efforts to provide continuous education for the directors. She also points out the positive support of nearby directors.
The safety of the election workers and all the voters has been on her mind during this year’s election preparation. Another concern has been where to store all the PPE that has arrived!
She affirms the security of the voting process when she says,
• “By state law, voting machines may not be connected to the internet, limiting the possibility of cyber interference.
• County boards of elections conduct logic and accuracy tests on every voting machine that will be used to ensure proper coding of ballots and counting of votes for every contest on the ballot.
• Every polling place is staffed with bipartisan, trained officials from the local community who take an oath to uphold state elections laws and work together to ensure election security.
• After every election and before results are certified, the State and County Boards of Elections conduct audits designed to detect irregularities.”

BONUS
Each voter during early voting will be given a Q-tip to mark the ExpressVote touch screen with their voting choices. The ballot will then be printed out and the voter will verify that their vote was recorded accurately before submitting for tabulation. Q-tips are not re-used.