J.J. Abrams’ initial reboot of the Star Trek franchise back in 2009 was greeted with much acclaim from the critical community and from audiences as well. I found that to be quite confounding. I felt that the essence of Star Trek and what made it so popular in the first place, namely that it was a series about ideas as opposed to action and special effects, was nowhere to be found in Abrams’ take on the beloved franchise. There were action set pieces galore and the film was well cast but nuance and depth were nowhere to be found and I was puzzled (and still am) as to why the first film resonated so well with audiences. The second film, Star Trek Into Darkness rectified those problems a little bit but on the whole it was clear that a new day had dawned for the beloved series.

And now we have Star Trek Beyond, the latest film in the series and the third in seven years. Any hopes that the film series might be heading into the more philosophical territories that the TV series inhabited were thrown out the window for good this time around. Star Trek Beyond is all special effects and action set pieces and not much else. That may be enough for today’s audiences. I can’t say for sure. What I can say is that anyone expecting anything beyond what’s on the surface need not apply.

Abrams has been replaced in the director’s chair this time around by Justin Lin, best known for his stint behind the camera on the Fast and Furious franchise. He brings a lot of that expert flair for staging action sequences that he does so well over to this film.

It’s a good thing Lin knows what to do on that front as the script gives him very little to do other than give him an opportunity to showcase his sizeable talent for such things.

The script, co-written by series star Simon Pegg, has the crew being besieged by an alien race. The USS Enterprise is damaged in the process and most of the crew is forced to crash land on a distant planet in the interim. There are a few dramatic conflicts here and there but not anything that will take precedence over the film’s aforementioned action sequences.

There are nods to series stars Leonard Nimoy and Anton Yelchin, both of whom passed away since the last installment in the franchise. They both deserved the send off the film gives them but it would have been nice if the filmmakers had given audiences something a bit different instead of retreading such familiar ground.

Movie is playing everywhere around the area. 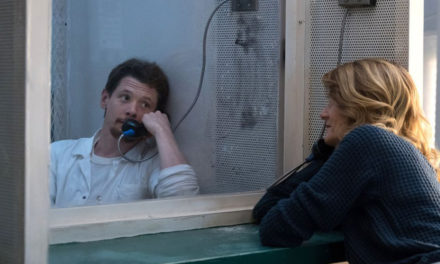