Home » Columnists » Have Chainsaw Will Travel » Runs With Rabbits

Posted by FOCUS Newspaper | February, 13, 2020 | Have Chainsaw Will Travel

A high pitched whine fills the air, droning into an intense deafening squeal. As suddenly as it begins, it stops. Moments pass and the sound resumes at full force with increased volume; listening, he waits. Another pause—all is silent. Then the noise returns with a shriller tone, threatening to shatter the glass picture frames throughout the house. This time the noise does not abate, resigning to the fact it will not soon stop of its own accord, he rises from his chair.

She closes the laundry room door as he enters the kitchen. The door does little to drown out the horrific wail emitting from behind it. She looks small and embarrassed, his look and tone are serious as he addresses her, “The neighbors called…asked if we would just go ahead and kill that pig outright instead of torturing it.” She launches a smile which he returns with his eyes as he steps past her entering the laundry. She steps closer to the closed door, peering through the curtain and straining an ear: how does he do this?

Standing before the dryer, head tilted like the RCA dog on those old record albums he adores, almost as if he’s studying the sound. Tentatively he depresses the power button opens the dryer door and the machine grinds to a halt. Kneeling down he reaches in and turns the drum one full-cycle by hand. Satisfied he closes the door and prepares to restart the machine but then… Placing his hand gingerly atop the machine his voice carries sincere sympathy, apology and supplication. “I know you’re tired. You’ve served us well for many years and are due a much needed rest. But right now we can’t afford to replace you. So if you’ll hang in there…just awhile longer, I promise an honorable end to your appreciated servitude and a refurbished long life ahead.” With this and a gentle press of the power button the only sound is that of the clothes within tumbling. 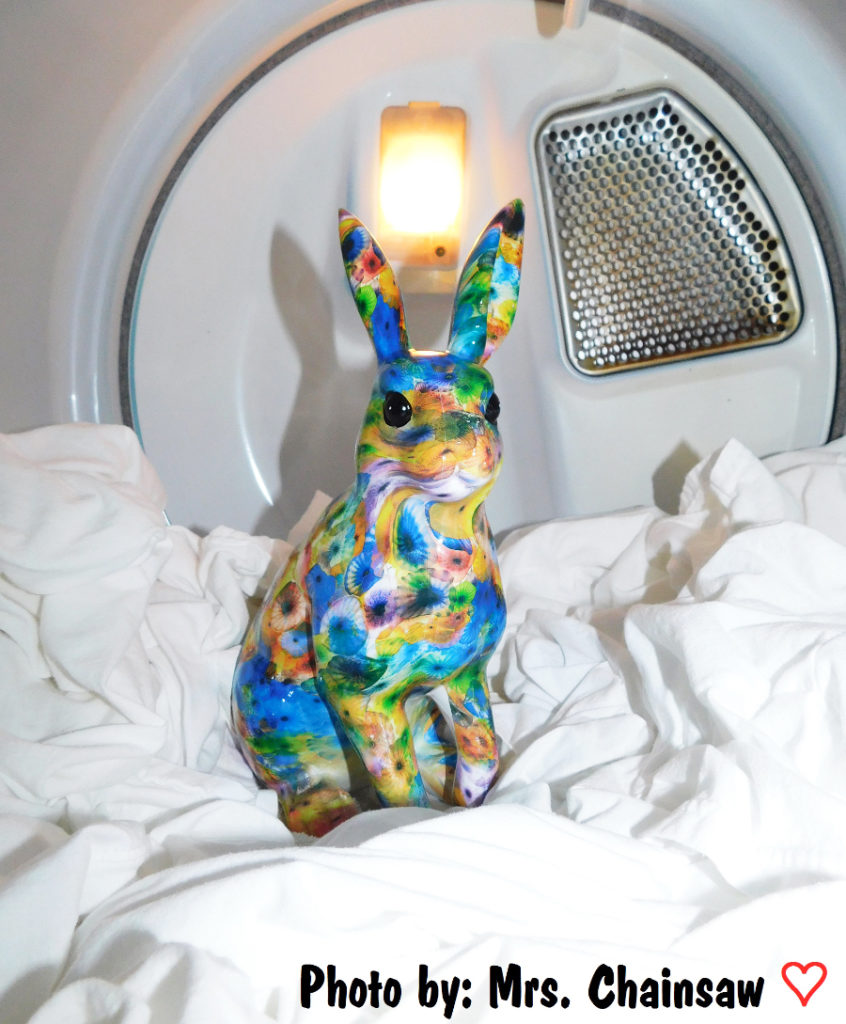 He reenters without a word but with that raised brow and sideways smile she knows so well. He looks tired, the man never stops, but that smile, “her smile” is always there. She watches as he walks to the kitchen table, picking up their latest eclectic acquisition- a psychedelic multicolored fiberglass rabbit, purchased for him by her earlier. As they’d left the store he stated simply “Valentine’s Day covered!” He wanted nothing else, to him there was nothing better and he didn’t want her to worry about what to give him, because he’s wasn’t.

She has spent a decade with this man who’s just consoled an appliance and now stands staring intently at a synthetic tie-dyed Lepus, and has yet to grasp the full concept of him. To the casual observer it seems obvious he’s bats*** nuts… or perhaps a vestige of sanity in a world full of madness?

Either way if he is crazy—it’s about her. She can see it in a tender glance, hear it in soothing baritone or feel it with a gentle touch. His head may be in the clouds but she’s always on his mind. She is the light within his dark soul. His heart runs with rabbits but always races back to her.

Though they oft accompany the 14th day of the 2nd month—cards, chocolates, flowers (and psychedelic multicolored fiberglass rabbits) are an unnecessary nicety; because she is his Valentine every day. It’s there in the little things along the way that say “I love you” without saying a word. It is hugged goodbyes and heartfelt hellos, “thinking of you” texts just because he is, waking smiles and goodnight kisses. She is his better half so he must treat her better than he does himself. At the end of the day her pretty smile and trusting devotion is all he’ll ever need to survive into the next.

Ten years may seem like a long time to love just one someone but if it’s the right someone it passes in a heartbeat. And as the next beat is a decade in passing he still knows, just as he did with the first, that she always was and will be his Valentine.

Dedicated to my beautiful best friend, my Lil’Red, my sweet Christina, my forever Valentine… Thanks for the colorful bunny-rabbit- its super-neato!