Home » Columnists » Have Chainsaw Will Travel » Now I Have A Machine Gun! Ho-Ho-Ho

Posted by FOCUS Newspaper | December, 12, 2019 | Have Chainsaw Will Travel

“It’s beginning to look a lot like Christmas…” everywhere you go. And it has been “beginning” for what seems like forever. All it ever seems to do is continuously be beginning, without ever actually achieving a point beyond looking a lot like. Maybe because it’s drilled in and drug out so long that when it’s actually “looking” nobody is!

It begins and ends with shopping, always and forever the shopping. People Xmas shop year round starting December 26th. If not, they struggle through the entire month long or brave it the night before. Then there’s the food…Xmas foods. Baking and cooking and roasting and deep-frying, preparing for the gatherings. Which, let’s be honest, nobody really likes to gather, dreads to gather; till you’re actually gathered then it seems OK. Oh and the decorations — the tree, the room, the house, the yard, the workplace, ourselves. It’s lights, tinsel, ceramics, inflatables, ugly sweaters, Jesus Christ its Santa Claus all of which will have to be undecorated after “the event.”

Yes, all of this preparation — greed, gluttony, pride, faux cheer and flamboyance, all for just one day of actual X-mas. And during this elongated, collaborated, madness that consumes the populace there are but two redeeming factors. The innocent smile of a child on Xmas morning and catching a pause in all the “holiday festivities” long enough to enjoy your favorite Xmas movies.

At the House O’ Saw there are 3 films which define the holiday: It’s a Wonderful Life, Gremlins and Die Hard. Now this brings up the long running argument of whether or not Die Hard should be considered a “Christmas Movie” (Dude…what about Gremlins? Seriously – WTF?). We’ll settle that argument, but first a list of Christmas movie criteria and how Die Hard (and Gremlins) meets holiday film standards. 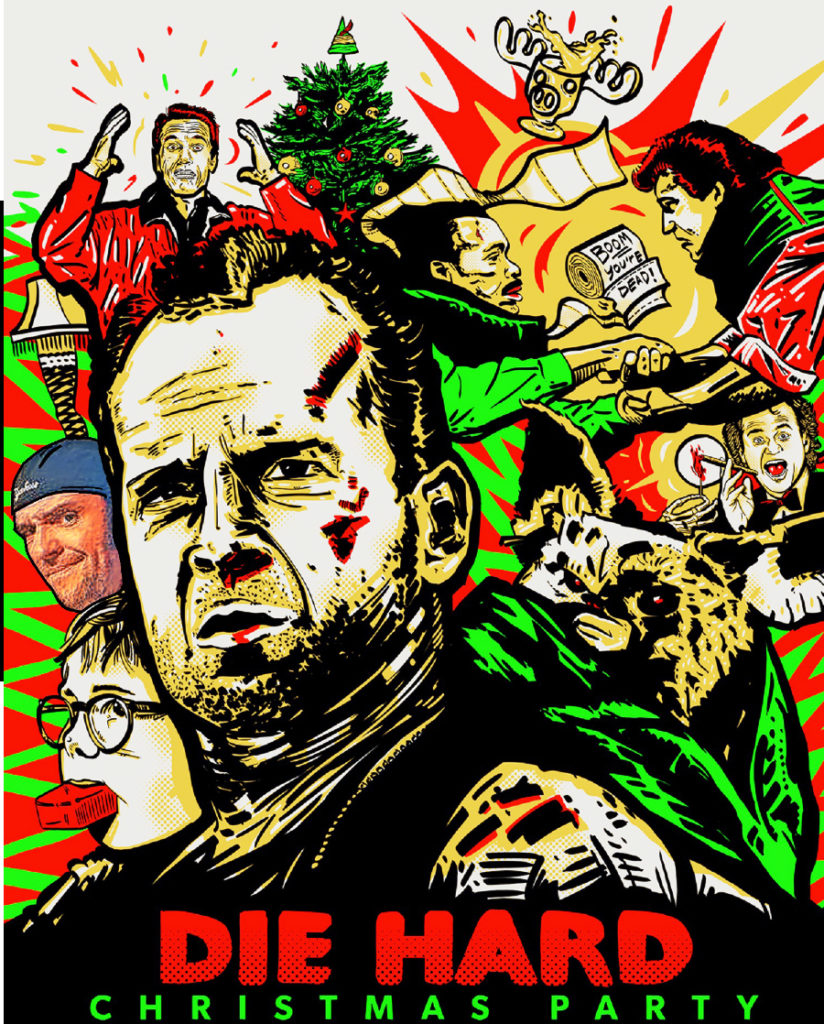 2. Is there Christmas music? Yes, Die Hard, “Let it Snow” sung by Sergeant Al Powell (Reginald VelJohnson) before a dead body smashes his windshield and his car is riddled with machine-gun fire; Gremlins, “Do You Hear What I Hear?” by Johnny Mathis when the gremlins invade the Peltzer house.

5. Is there reference to Santa Claus? Yes, Die Hard, John McClane places a Santa hat on the head of, and writes “NOW I HAVE A MACHINE GUN HO-HO-HO” on the chest of, a dead terrorist. Gremlins, a man dressed as Santa is viciously attacked by a plethora of gremlins on the street.

7. Is there a holiday moral? Yes, Die Hard, make fists with your toes to recover from holiday travel jet lag. Gremlins, do not give Mogwais as gifts. With Mogwai comes great responsibility! You do not understand. You are not ready!

OK, so maybe that list isn’t the best endorsement for either of these films to be considered “Christmas movies.” But here’s the thing — they already are. We said we’d settle the “Die Hard” argument and we already have. Because there is no argument. Christmas movies, much like the holiday itself, are what you make of them. If a film, (any film) makes you feel the spirit of the holidays, makes you enjoy them a little more, then it is a Christmas movie, whether anyone else likes it or not! So have a Nightmare Before Christmas with your Eyes Wide Shut before Batman Returns with a Lethal Weapon on Black Christmas. Yippee Ki-yay motherfu…err. Merry Christmas…same thing.

I welcome almost all questions and comments via FOCUS, or E-mail me directly at – wanderingchainsaw@gmail.com.