Zappa (2020) Actor and filmmaker, Alex Winter, turns his attention to the subject of legendary Rock musician, Frank Zappa, in this revealing documentary featuring tons of never before seen footage from the late musician’s personal archives. Popeye (1980) The live action adaptation of the beloved cartoon and comic strip character makes its Blu-Ray debut with 30 minutes of bonus features in a new 40th anniversary edition. Veteran actor, Paul Dooley, who plays Whimpey in the film spoke with me last week and shared some remembrances.

Adam Long: I’ve heard that Popeye director, Robert Altman, encouraged improvisation. I was wondering how close they actually stuck to the script?

Paul Dooley: Well Robin (Williams) wouldn’t stick to the script because Robin is Robin. I heard him do an ab lib line once where he said, ‘I’ve traveled the seven seas and I stopped in Manila and picked up a few envelopes.’ You could hear him ad libbing around the dialogue. Jules Pfeiffer (the film’s writer) went to (Popeye director) Robert Altman and said ‘You’ve got to tell Robin to stop making things up. We’ve got a perfectly good script here that took a long time to write, based on the comic strip. Altman said ‘I’m not going to tell my actors what to say.’ He (Pfeiffer) knew we had Robin and even liked his improvisations. He left the island after that (they were filming in Malta) and said “I’m not needed here anymore to watch these actors not use my lines.” I am always loyal to the writers so I used his lines. What I invented was more physical comedy, stuff I did visually.

Adam Long: I understand those sets are still standing after all these years down in Malta?

Paul Dooley: Yeah it’s called Popeye Land. I think it’s now been painted in bright colors. I’ve been told that. It has gift shops and hot dog stands and ice cream stands and souvenir stands. It would take too much money to tear it down so Altman said that he would give it to Malta and let them do what they wanted to with it. It was about fifteen buildings, a whole little town and so they gave it to them to use. It’ll probably be there forever.

Also being released this week by the company are 4K upgrades of Beverly Hills Cop (1984) and Coming to America (1988) as well as new Blu-Ray releases of Trading Places (1983) and The Golden Child (1986). Additionally they are also releasing a collectible 4K steelbook edition of Top Gun (1986).

Paramount, in conjunction with CBS DVD, is also issuing Mission Impossible: The Complete TV Series (1966-73) on Blu-Ray in a 46 disc set.

The Lord of the Rings/Hobbit Trilogy (2001-2014) All six of Peter Jackson’s adaptations of the legendary fantasy novels have been issued on 4K and with lots of extras that are sure to please fans of the series. 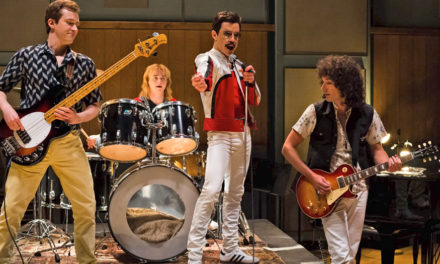