Home » Columnists » Have Chainsaw Will Travel » NEAR MISSile

As 2019 came to a close North Korea promised the United States a Christmas gift in a sideways threatening kind of way. Hinting it would come in the form of a gift wrapped intercontinental ballistic missile (ICBM)…a test one anyway. Brrrreeeeee… this is a test…this is only a test, of the Emergency Broadcast System. Do not pass go, do not collect $200. Had this been an actual emergency…well then you might be dead shortly thereafter depending on your locale and that of said missile.

How can “testing” a missile not imply some form of emergency? How exactly does one “test” a missile? The only way to “test” a missile is to fire or launch it at something. If it takes off, goes where you want it to and blows whatever you aimed it at up then the “test” was successful? How the f*** is that a test? Hey sorry we blew up your city and killed most of the population, but it is okay…it was only a test.

Our current President made light of the threat publicly, stating “Maybe it’s a nice present. Maybe it’s a present where he sends me a beautiful vase instead of a missile test.” Seriously? A missile test implies that a missile will be fired – possibly at us! What kind of idiot makes jokes about such things… as being shot at by missiles…even if it is just a test? We are not going to take this easy opportunity to delve into one of the forbidden subjects for this column, namely politics. Besides it’s much more interestingly devastating the way we the people responded: MEMES. Little humorous one-line, online jokes or anecdotes usually accompanied by a picture. Because having missiles shot at us is sooo hilarious. Hey, we’ve been threatened with a missile “test” – MEMES. Hey, we sent a drone to kill a foreign leader and they’re kinda pi**ed at us now – MEMES. Hey, a war has been declared – MEMES. We might go to war – MEMES. There are talks of a draft ­­- MEMES. It’s World War 3… MEMES? What the hell is wrong with people, specifically the American people?

Oh, it’s easy to make jokes anonymously, hidden behind a screen and a firewall, from the relative safety of American soil and your parent’s basement. Yes, we are Americans! We are untouchable, nothing can harm us, we don’t worry about a d***ed thing especially the consequences of our actions! We can say and do whatever we please, because it is our right as Americans to do so, because we say so. Yes, you can be certain all Americans were thinking something very similar right before 9/11, too,… morons.

Are “We the people” naïve enough to believe that we are immune to terrorism, war or being overthrown from within? Or do we make jokes at our own potential expense as a coping mechanism? Out of fear of something we have no control over and can’t mentally process? 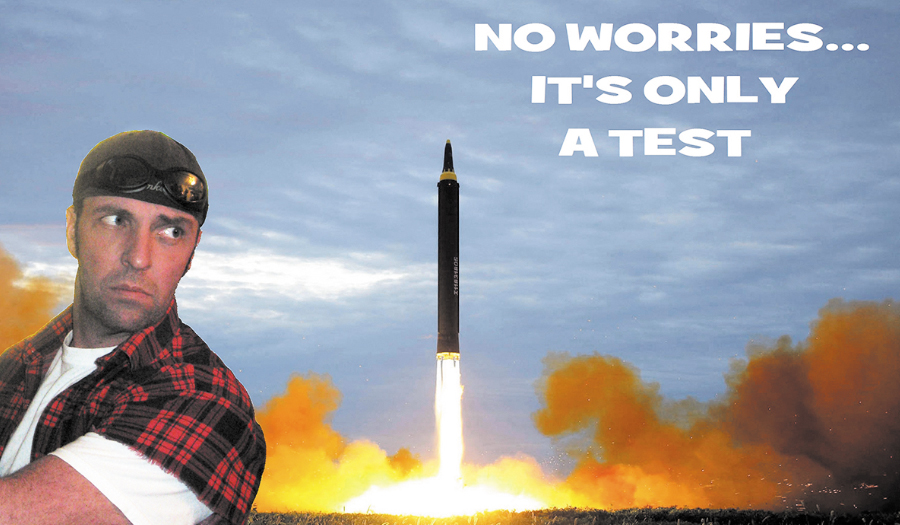 Though cracking wise probably isn’t the best course of action, really…what are you gonna do? If there’s an act of terror or a missile strike it will be rather spur of the moment spontaneous; it’s not like something you can plan for. Even with an advanced warning of an impending nuclear threat or even a test missile strike, how much time would you honestly have? Where could you go? What could you do? Even if you had a “safe place” to go would you have time to get there? And how safe is safe? Depending on where stuff blows up it’s impossible to determine safety till after the fact.

More importantly, courtesy of the lack of serious context in social media and “FAKE NEWS,” how long before you realized it was real? How long before you’d come to the realization you must take action? Before you understood the jokes on you and it’s over, — most likely just mere moments before it is.

So should we cower in fear at known and unknown threats daily? Jump and panic at ever potential threat to our nation? We can’t really be prepared for a fight because if the fight reaches us (via long range missile)… that means it’s over. Should we go down laughing? Meme-ing all the way? All the while hoping our enemies fail their tests.