Posted by FOCUS Newspaper | September, 13, 2018 | Have Chainsaw Will Travel

“Oh, and if you see Burt Reynolds would you shake his hand for me and tell ol’ Burt I’ve seen all his movies. Well, I hope you make for big time, I hope your dreams come true! But if Hollywood don’t need you, honey, I still do.” Excerpted lyrics from- “If Hollywood Don’t Need You” by Donald Ray Williams the “Gentle Giant” of country music (May 27, 1939 – September 8, 2017).
September 6th 2018, Thursday afternoon, 3:40pm, leaving work lost in a daydream about a better world. I’m stopped by a fellow who could easily have passed for a background extra in a Burt Reynolds film. “Hey did you hear the news?” in a slow drawn southern drawl, “Burt Reynolds died!”… Snap back to reality… oh there goes gravity!

“Oh…man that sucks!” is all I could manage as I mindlessly float away across the parking lot. Get into the truck. Drive away.

Driving the route home in rapt silence, lost in baffled thought and recollection. The law and my own personal convictions about cell phones while driving are mindlessly broken. Verbal request, quick scan and search and soon the truck’s cab is filled with the low harmonic verses and slow rhythmic melodies from the song mentioned above. Lyrics and road unwind and I find myself getting a little misty as the song and the ride reach their simultaneous conclusion.

The strangeness continues even once within confines of the walls of the House o’Saw. Multiple YouTube searches recall old and forgotten film friends. Jackie Gleason (February 26, 1916 – June 24, 1987) the Bandits Scum-bum Smokey, Ned Beatty squealing like a pig, Jim Neighbors (June 12, 1930 – November 30, 2017), Jackie Chan, Dom DeLuise (August 1, 1933 – May 4, 2009) good ol’ Captain Chaos dun dun dunnnn! Adrienne Barbeau… no one can rock a purple cat-suit like you. Not to mention the first on-screen appearance of Cassandra Peterson as Elvira Mistress of the Dark… (seriously she appeared in character opposite Jim Neighbors in Stroker Ace circa 1983). Of course this search brings us to the comedic talents of country singer/ songwriter Jerry Reid a.k.a. – The Snowman (March 20, 1937 – September 1, 2008).

Let’s set the record straight I am not now, nor have I ever been, a huge Burt Reynolds fan. And please do not mistake this article for a memorial for him. However I cannot deny the fact that growing up in the 70’s and early 80’s in the south you viewed the Bandit and all his subsequent characters with something akin to original Southern pride—something that has been long lost in a torrential sea of racial slurs and redneckisms.

Regardless of what is or what it has become, I grew up with and enjoyed Burt Reynolds movies throughout my elementary years. Some revisited occasionally in my adulthood for nostalgia’s sake. But 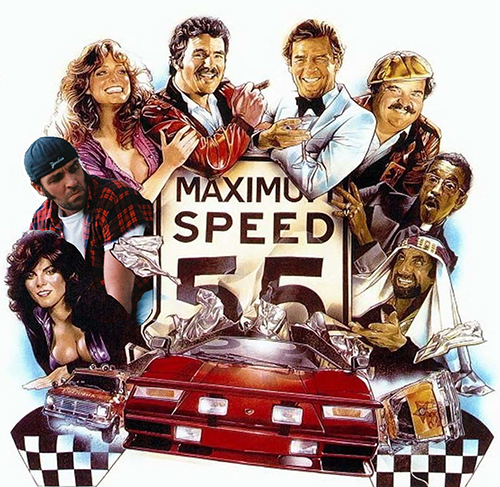 even then, considering all this, why do I feel so bummed out?

I hadn’t thought of Reynolds or any of his films for literally decades. He and they were nothing more than relics of memory, things from the mostly forgotten past…and yet…it troubled me.

Lil Red (that’s the spouse) came to my rescue, and after telling her of my misplaced woes, she comfortingly explained my bizarre emotional speed bump. She said that what I was experiencing was a glimpse of mine own mortality. That when we lose someone that we have “immortalized on the silver screen” we become aware of their mortality and thus more conscious of our own. Her words rang true, but still as aforementioned, I had never been a big Burt Reynolds fan. Perhaps my dismay and moralization wasn’t a result of his passing as much as it was the cumulative films he represented in my mind…just great…I’m mourning movies from my youth. That sounds much saner and maybe it is.

It’s like when you go into an antique store and recognize items from your past on the shelves. There are things you recall from grandma’s kitchen. And look, isn’t that the same kind of radio your dad listened to when he was a boy? Over here’s some of those toys your older brother wouldn’t let you play with. And then—What’s this??? I remember this! I had one of these…when I was a kid. It starts out cool and neato mosquito, but if you’re not careful it can become depressing really fast.

In seeing these “vintage” items, in watching those “classic” films, you slowly come to the realization that perhaps you have reached the vintage stage in your life. Now the scary question of will you live long enough to become an antique comes to mind.

We all get older, there’s no stopping it, and there are constant reminders along the way. Accepting the reality that life, all life, is finite is important and makes it all the more precious to behold. With the passage of time we watch the world around us, the world we know, slowly fall into rot and decay in the blink of an eye. All the while it is being replaced by a new one which is unfamiliar. It is up to us to choose whether to ride out our days on a dusty antique store shelf or embrace a whole new world…don’t you dare close your eyes because we are all immortal till we die.