How many of you recall a back-in-the-day time when certain homework assignments would require the use of a dictionary? Remember having to write down the definitions for that week’s choice of spelling words…anybody? This done to aid in not only learning a new word but its meaning and how to use it properly in a sentence; with a writing exercise thrown in for good measure. Back then you’d pull the always reliable hard backed edition of Webster’s off the family bookshelf and get to defining.

Sadly those are days gone by and an actual physical dictionary is something of an antiquated novelty. Nowadays any search for anything, including definitions, begins with “Hey Google…” Still the first place Google will take you has a link to the definition via Merriam-Webster.

Despite its available format in the online world when most contemplate the dictionary, they see an age old set of rules for diction and vocabulary from a bygone era. To be used only for grammatical errors and historical reference. In truth, the dictionary is constantly shifting and changing to keep up with our growing world and terminology. Did you know that each year hundreds, if not thousands, of words are considered and a choice few added to it. Simultaneously older words are altered or removed from it altogether.

All the while vocabularians (creators of new words) continue to challenge Webster’s by creating new words and terms. Posing the question of, how can “anything” not be considered a word? After all Webster’s itself defines a word as: a letter or group of letters, written, printed or spoken, having meaning and representing a unit of language. So technically anything you say, that can be written down, sounded out and defined is a word.

So since everyone else is doing it I figured why not screw with the English language a little and quote a few of my own vocabularianisms. So here are some new words of my own and some old ones redefined that you won’t find on or off-line.

baby duck: what you tell a baby when something’s flying towards its head.

bathroom: a request for more space to bathe. 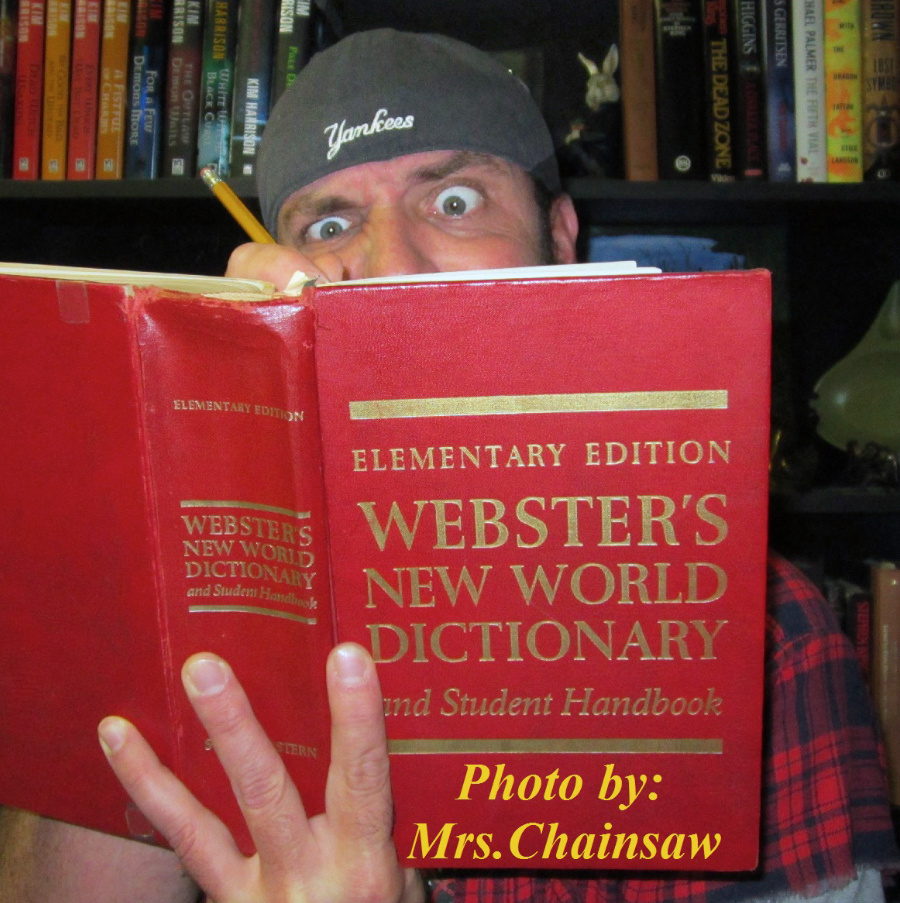 booty-hole: a hole in the laundry basket specifically sized to put baby booties in. Like little socks, not baby butts.

computer mice: when you have more than one computer mouse… mouses…mice?

delaminate: when you want to remove the laminate from something: “Let’s delaminate these countertops!”

deliminate: when you’re determined to eliminate something.

determatologist: a medical professional that tries to determine what’s wrong with your face.

detergent: something done to discourage a gentleman.

epic fail: when you fail at something epic: “That was an epic fail when he lost that fist fight with ninja Jesus….in the volcano.”

funko-pop: when you hit someone for being too funky.

gigabyte: when you bite someone because they flipped you off.

h-e-double hockey-sticks: a term for a man who likes hockey so much he owns two.

illegal alien: a U.F.O. pilot without a license.

imbeseal: a seal to keep out idiots.

imbesealant: now in an easy to use aerosol spray.

irrelephant: an elephant that does not matter.

laundromate: a friend to do laundry with.

ninja Jesus: just like regular Jesus but a ninja.

numb-chucks: a group of guys who share the name Charlie and feel nothing.

posthaste: when you’re in a hurry to mail something.

pot-holder: a more spot on name for a roach clip.

pro-sthetic: a synthetic limb for professionals.

recycle: when you decide to ride that bike again.

rhinoserious: when you sincerely try to convince someone there’s a rhinoceros behind them.

timberland: the place where a tree falls: “Where do you think that tree will timberland?”

timberlake: what you say when you cut down a tree knowing it’s going to fall in a lake.

toiletree: where toilets come from.

trump: a metaphorical wall you put up to someone who doesn’t see things your way.

zebra (pronounced ze’-bra): how French people refer to a bra.