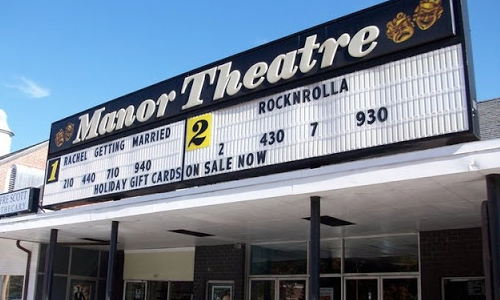 The news cut like a knife last week, although it shouldn’t have been totally unexpected. Charlotte’s oldest surviving theater, The Manor, would be shuttering its doors after 73 years. Let that sink in for moment. When this movie house first opened we were only two years removed from WW II and the first movie that played at The Manor back in 1947 was the comedy, The Egg and I. In case you don’t recall, that’s the film that introduced the characters of Ma and Pa Kettle and the Kettles would go on to have a series of films of their own but I digress. That piece of trivia isn’t really important except to illustrate the changing trends of movies over the years.

As time passed, The Manor would eventually rebrand itself as Charlotte’s premier theater for showcasing the non-mainstream, arthouse film that is all but non-existent in traditional theaters. it also doubled in size from one  to two screens. Other art house theaters would come and go over the decades but The Manor got there first and was the last of its type in Charlotte. Three years ago the city had 13 arthouse screens. Now the Queen City has not one screen dedicated to showcasing films that are more than escapist fare. We are all the poorer for it.

My personal relationship with The Manor is an interesting one. My cinematic diet as a child mostly consisted of typical pop culture fare that most kids my age were seeing. Of course there was the occasional diversion that would pop up on cable or in the video store but you get the point.  It wasn’t until I was in my early twenties that I began to see the power of cinema and how it could literally change lives. I began to understand how movies could provide catharsis for emotional challenges in life. You could experience worlds you were never going to see and come away with a better understanding of the human condition in general. I found myself becoming more and more drawn to these films and coming from a small town attempting to experience them became a bit of a challenge.

I was in the midst of educating myself on the careers of certain directors when Robert Altman, a filmmaker who’d made his mark in the 1970s but had been all but unemployable in the following decade, had staged a critically acclaimed comeback with his Hollywood satire, The Player. The only theater within a 200 mile radius playing the film was, you guessed it, The Manor. So on a Sunday night in April 1992 I made my first trek to The Manor and it was a pilgrimage that I would continue to make for the next 28 years.

So many memories stand out in my mind. There was the lonely Thanksgiving night without a friend in the world when I took in Altman’s follow up film, Short Cuts, and found myself sublimely transported into the lives of troubled Southern Californians for the next hours. And there was the first time experience of seeing Casablanca at The Manor for its 50th anniversary. There were films by the Coen Brothers, Woody Allen, Todd Haynes and Alexander Payne that were experienced there for the first time and became life long favorites. And there was the great staff that I’d come to know and become friendly with over the last several decades and who also provided great conversation after the films had unspooled. I’ll miss all of that and so much more. It was a good run but now that run has finally reached its end. I can’t imagine a life without The Manor but I guess I’ll to have to try. Seniors Morning Out To Include Valentine’s Day Celebrations