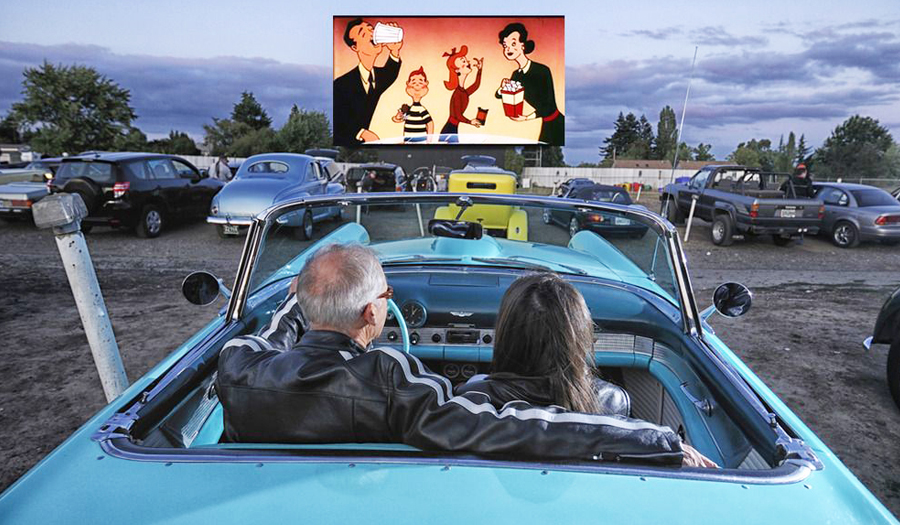 Louisville, KY (AP) – The essential truth of the Sauerbeck Family Drive-In is right there in its name, but in case you somehow missed it all you had to do was look around Friday night during the outdoor theater’s grand opening.

Sauerbecks were everywhere. Stephen roamed the parking lot helping patrons, Danielle worked the concession stand scooping popcorn, and their three kids did what kids do when your parents own a brand new drive-in.

There was extended family as well. Ami Loy, who played matchmaker for Stephen and Danielle nearly 20 years ago, joined Danielle behind the concession counter. Old friends caught the Sauerbecks’ attention all night long for a high five or quick compliment.

It was a little slice of Americana in a divided world that desperately needed at least one night when the weather was cool, a prehistoric shark was trying to eat actor Jason Statham, and a lifelong movie nerd fulfilled a dream.

Sauerbeck has always been a sucker for movie magic. His first job was at the defunct Oldham 8 movie complex, where he worked with Loy, who was Danielle’s best friend. Danielle needed a lift one night and Loy cagily volunteered Stephen; that was three kids and a drive-in movie theater ago.

Cars began arriving shortly after 6 p.m. Friday, nearly three hours before Statham was scheduled to fight off a 75-foot shark in “The Meg,’’ a perfect drive-in movie. The 350-car lot was nearly filled by showtime and 757 paid to attend.

Larry Lathan and Terry Rogers drove up in a 1960 AMC Rambler, mechanically sound but road-worn in all the right ways.

Both Lathan and Rogers grew up in the area and had been following the saga of the Sauerbeck Family Drive-In for a few years. A different site had been proposed but came under fire from residents concerned about traffic.
After much grinding of gears, a third party stepped in and offered a fairly secluded piece of land a few miles off Interstate 71 outside of LaGrange. A cool $2 million later, Stephen Sauerbeck named the long entrance road D.W. Griffith Lane, after the Oldham County native and film-making pioneer.

“I didn’t think it was ever going to happen,’’ said Lathan, a veteran of drive-in movies who remembers seeing “The Planet of the Apes’’ in 1968 at Louisville’s Preston Drive-In, which was famed for its triple-feature horror movie nights.

Those were the glory days of drive-in movies, when it made more sense for blue-collar families to attend movies at a discount. Drive-ins were an American invention unique to car culture and Louisville had three – the Preston, Kenwood and South Park – while Indiana boasted the mighty Georgetown Drive-In, which is still going strong.

My family lived at the Preston, where we saw nothing but stone-cold classics: Japanese and Chinese genre films, including Bruce Lee and Godzilla movies; “The Thing With Two Heads,’’ starring Ray Milland and Rosey Greer stuffed into an oversized suit; and the most memorable of all, “The Exorcist.’’

My mother indulged our love of monster movies but wasn’t sure about “The Exorcist,’’ which was infamous for terrifying children and adults alike. We somehow convinced her but when Linda Blair launched into her first demon-possessed monologue and started doing questionable things with a crucifix, mom pulled out so fast that she nearly tore the speaker off its post.

That won’t happen at the Sauerbeck Family Drive-In, which will skew family friendly.

“Halloween will be an exception,’’ Danielle Sauerbeck said. “We’ll have a movie that I won’t watch.’’

Greg and Stephanie Hillner, church buddies with the Sauerbecks, were in full drive-in mode: mini-van with its gate popped, camping chairs, and a couple of tired kids named Sophia and Griffin who may or may not have been awake by the time The Rock and his giant ape buddy, George, saved Chicago.

“I told Stephen, `When you open, we’re there,’’’ Greg Hillner said.

“We’ve been really excited because it’s a lot closer than the Georgetown,’’ Stephanie Hillner said. “By the time you get home it’s so late.’’

Friday’s grand opening wrapped up at 1 a.m. Danielle and the kids were finishing up in the concession stand with Loy, and Stephen was just getting back from driving an employee home. He was needed: The lot was dotted with people whose batteries had died after listening to the movies via FM radio.

As the final credits rolled on his 98-foot screen, Stephen walked with a patron to their car, carrying a portable battery jumper and asking if they had a good time. He then spotted another hood popped open and jumped the battery of a grateful mom.

“Thank you, it was wonderful,’’ she said.

“I’m glad you had a good night,’’ Sauerbeck said.

He was flagged down again and trotted off through the thinning crowd, the light from the projector’s booth blazing over his head as he headed for another happy customer in a dead car.

“This has been fantastic,’’ he said. “We couldn’t have asked for more.’’ 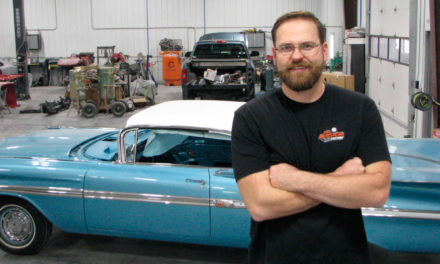